As a girl who was born into this crazy town –which I call a city, duh- I have this belief just like lots of my fellow MK’ers. We know our area, we helped create it and watch it grow, we believe we are MK. Born in the early 80’s when MK was just a child itself, it’s been a wonderful journey of us all growing up together. Place and person.

Now we know the stick that being from Milton Keynes gets. Those outsiders who just don’t quite ‘get it’. The slanderous calls of MK being nothing more than concrete cows, a soulless place without heart, and of course, those roundabouts. We can handle that, we all know that MK just fits us. It works and we love it.

But what I think is bittersweet now we are older is we see what MK is capable of, much like a mother sees in their child. Whilst MK has been very busy over the years attracting major businesses and investments, large modern retail parks and an iconic shopping centre. We are of course proud of all those things, we’re all pleased to see the progress but we’ve also been secretly disappointed and have complained that we don’t seem to nurture our home-grown enterprises. Some will go as far to say that CMK has lost, before its even really begun to create, its own identity.

Maaya, an Indian restaurant opening in The Hub doesn’t scream the stuff of front pages or breaking news. MK is home to some four hundred restaurants or more. So what is the big deal you ask?

First off, it’s an independent restaurant and the product and hard-work of four local businessmen, each with fantastic credentials. With two restauranteurs, a PR company owner and an IT Business Consultancy expert. It sounds a perfect mix of expertise.

Now let’s not forget opening anything within the grey blocked walls of CMK ‘the city’ to us MK’ers is not to be taken lightly. Rents and rates commanded in this area are a big part of the reason why I believe, we as a town have been labelled as sterile or without personality. Unique one off shops and restaurants can dream about opening up there, but normally it remains in the dreamlike state. We hear time and time again about chain restaurants opening up its fourth or fifth site within MK and we all collectively let out a sigh. Uninspiring, we are letting ourselves down. We know, MK is better than this.

You’ve got to hand it to the owners of Maaya then, opening up the first independent restaurant in the very trendy and popular The Hub with such style, finesse and most importantly, great food. 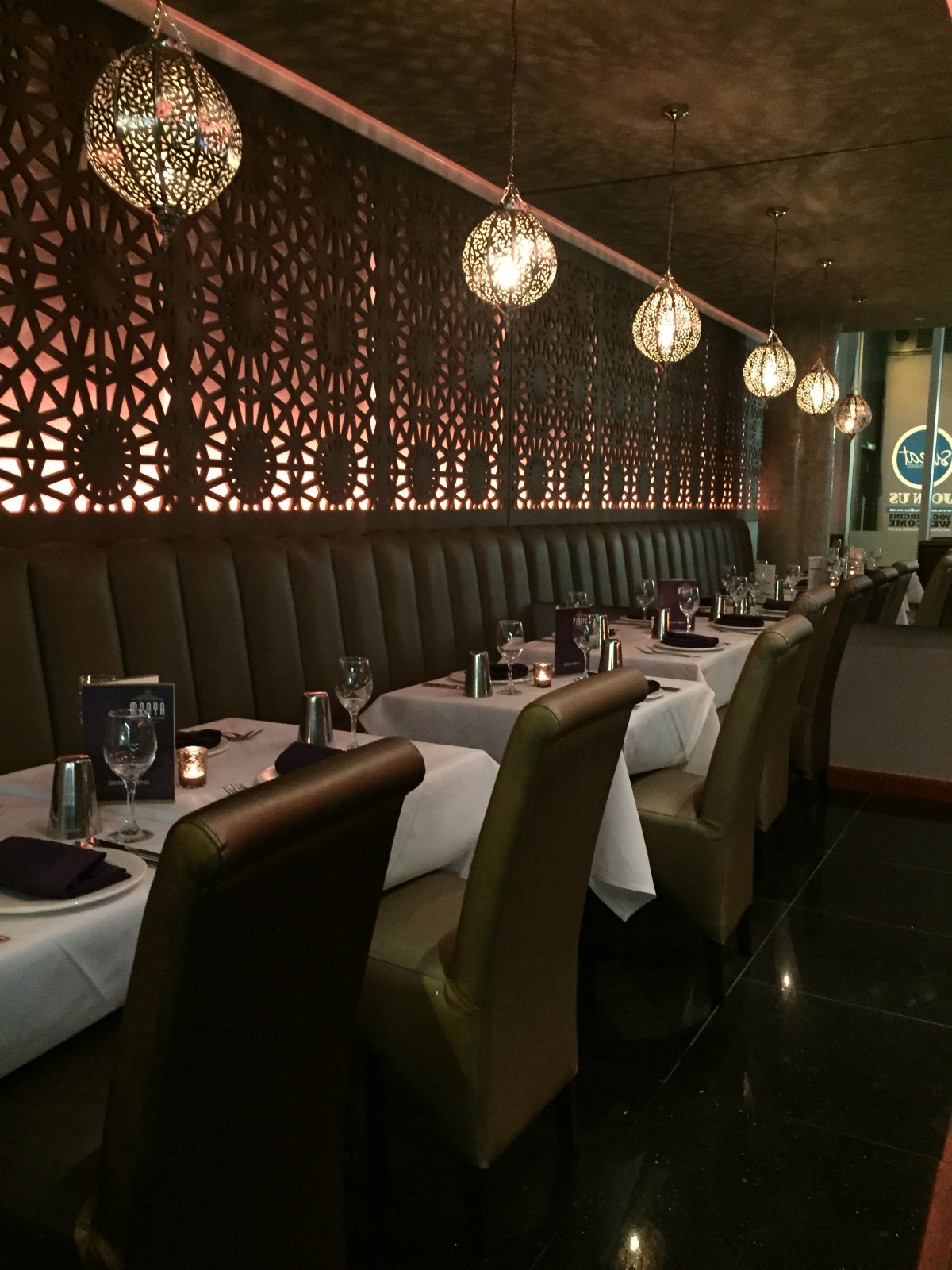 Last Thursday, I ate from their banquet menu and was so impressed with the quality and freshness of the food. Then last night I was lucky enough to be invited to their VIP launch evening and rubbed shoulders with The Mayor of Milton Keynes, a local pop singer and a pakora or two… yum.

Maaya has a great location with the perfect city ambience inside. It feels modern and swanky, without making you feel uncomfortable or unwelcome. What sounds like it has come straight out of London is the very impressive Chef’s private table which is upstairs on a balcony overlooking the restaurant. Perfect for Birthday parties or special occasions. When you dine at the chef’s table, the chef himself serves your food. It’s a wonderful touch.

So people of Milton Keynes, foodies, hungry bellies, cocktail sippers. This is what we’ve been crying out for and it’s here. A non-chain, high quality, local restaurant in the most exciting area. It cannot be the last but it sure is the first for The Hub.

Eat, drink, live MK. Maybe we are one step closer to stamping our concrete cow hooves over this *cough* city.