On Monday I was invited to a press evening to commemorate the reopening of The Black Horse in Woburn after a complete refurb. 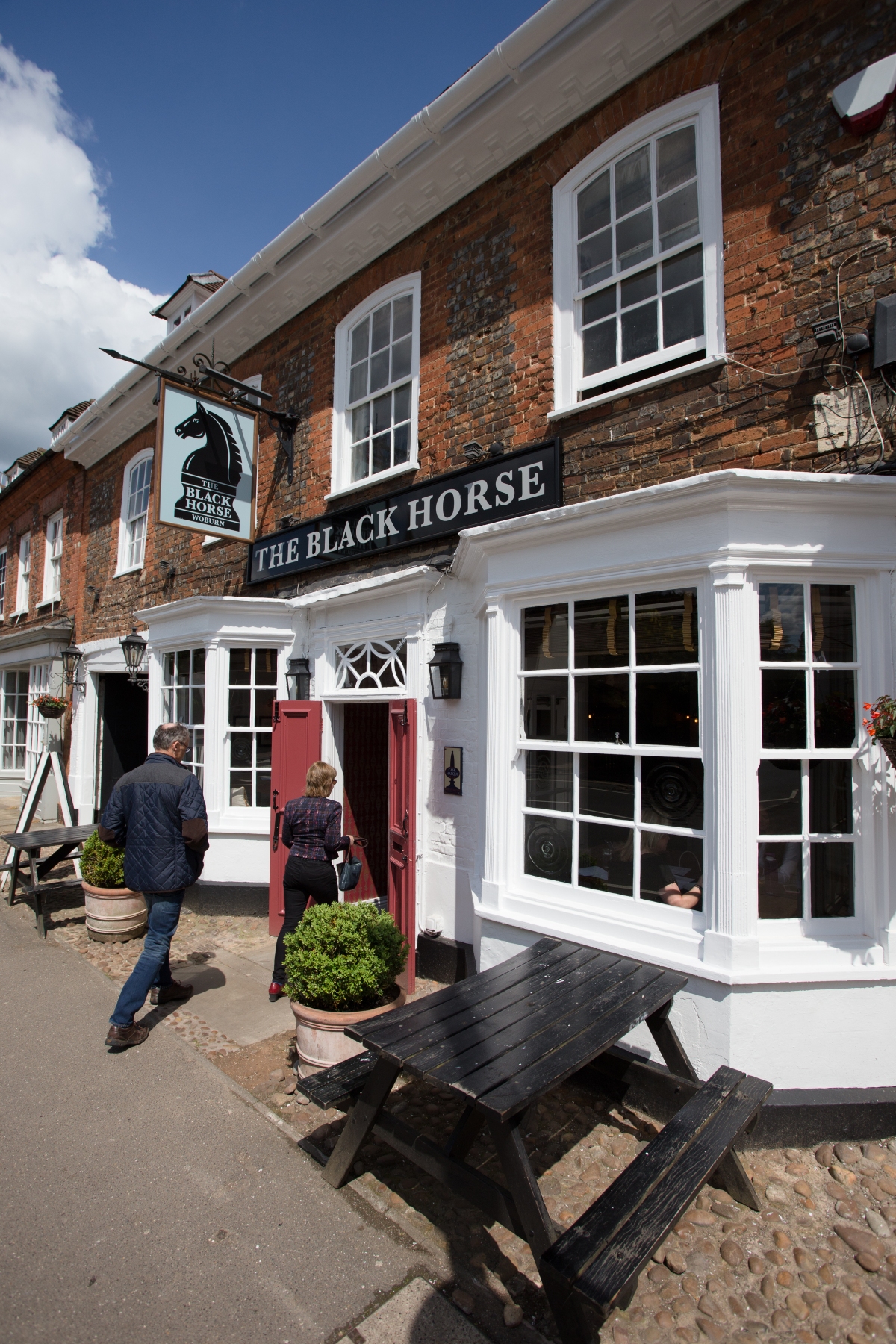 I must admit that Woburn is quite unexplored by myself despite its huge collection of very highly rated pubs and restaurants. Growing up in the north of Milton Keynes meant I had always favoured ‘that end’ of MK and was quite oblivious to what a beautiful, characterful place Woburn is.

I can’t say much about the changes that have happened from the refurb at The Black Horse. Monday night was my first visit but I’m sure it won’t be the last. It’s a very pretty pub set in a very old building in the heart of Woburn High Street.

Inside is exactly what you picture a well-looked after country pub should look like. Beams, traditional features, lots of locals supping away like it’s their second home. The décor is stylish, chic and it makes you feel comfortable and cosy without feeling like you’re squished in like sardines. 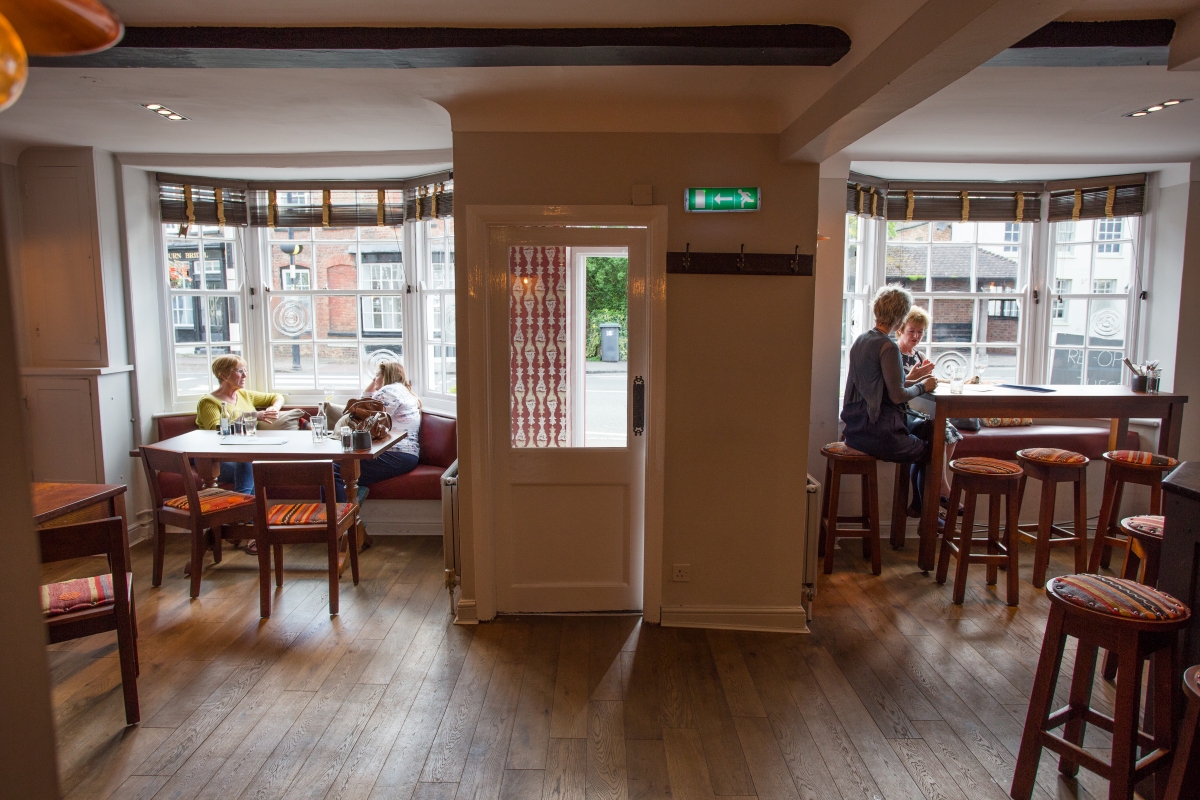 Bubbly was being offered to all the guests when we arrived but as I am currently pregnant, I had to sadly decline in favour of sparkling water. Boo hiss.

All the guests had a nice mingle whilst we became acquainted with our surroundings. It was great to see fellow bloggers Jo from Girl Eats World and Rob from RobsRibs along with some other old faces.

We were then led to the rear of the pub where it was more formally set out as the restaurant for dining guests. Lovely luxurious velvet and tweed chairs, leather booths with cushions for extra comfort. These were all in shades of red and orange which struck a lovely vibrant note against the dark walls which were adorned with copper cooking accessories. I love me a copper saucepan and I really liked them being used as wall décor in the restaurant. These I’m told were sourced locally from The Antiques Association in Woburn. 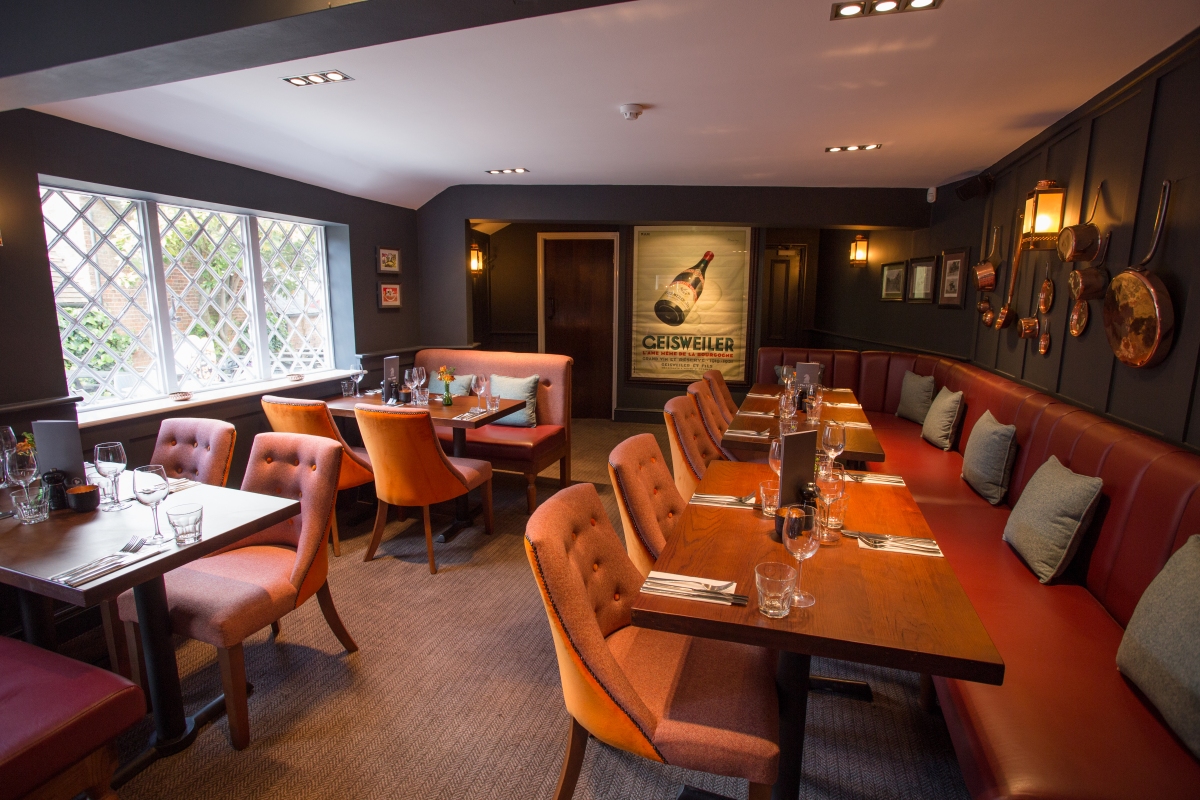 Then it was time to take our seats and strap ourselves in to see what the chefs were going to present to us. We were told that this evening was giving the chefs a chance to showcase dishes from the new summer menu on offer at The Black Horse. As my eye gazed excitedly down the menu that was left on our place sitting, I counted FIVE courses with tasters of numerous dishes on each of them. I knew then that I was not going to be leaving the night with a hungry tummy. 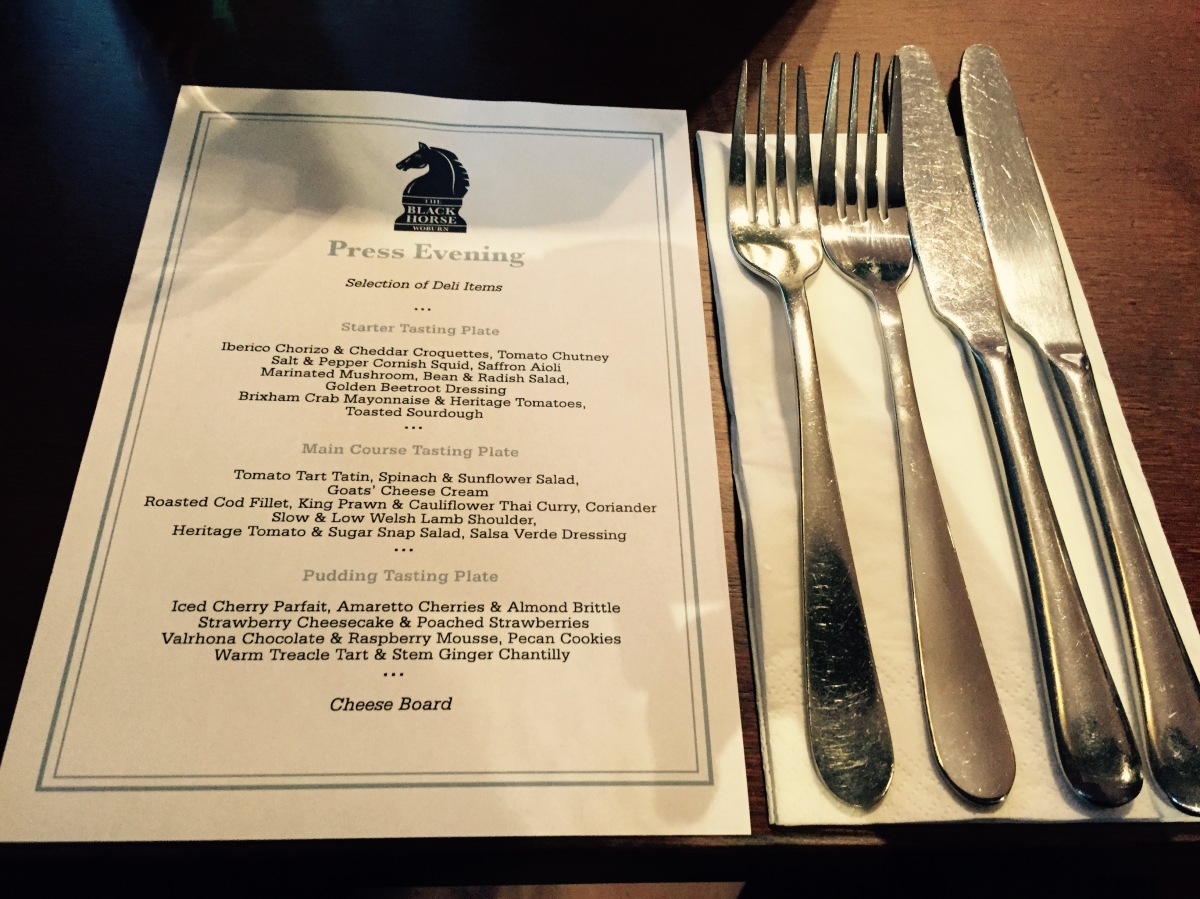 I’d like to note a couple of things before we begin with the food. First that the two chefs in the kitchen seemed to be serving a usual dinner service as well as the separate press event. Second, how often is it that you will be serving up four different dishes on the same plate? Please remember this was a press event and taster courses show casing a variety of dishes and that’s why you might think the plates look a little weird in combination.

First up we were presented with a deli board to share. On the board was slices of Rare Roast Beef, Spiced Tomato Houmous, Puttanesca Olives, Cheddar & Sunflower Seed Palmiers, Whitebait with Lemon Mayonnaise and a Warm Mini Loaf. 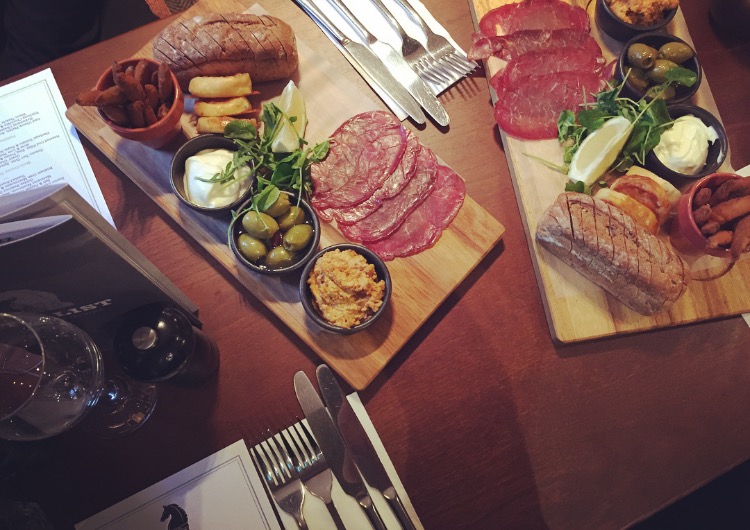 Deli boards are a personal favourite of mine, having choice and different things to nibble on is how I enjoy my food. The homemade houmous and rare roast beef were particularly pleasing. 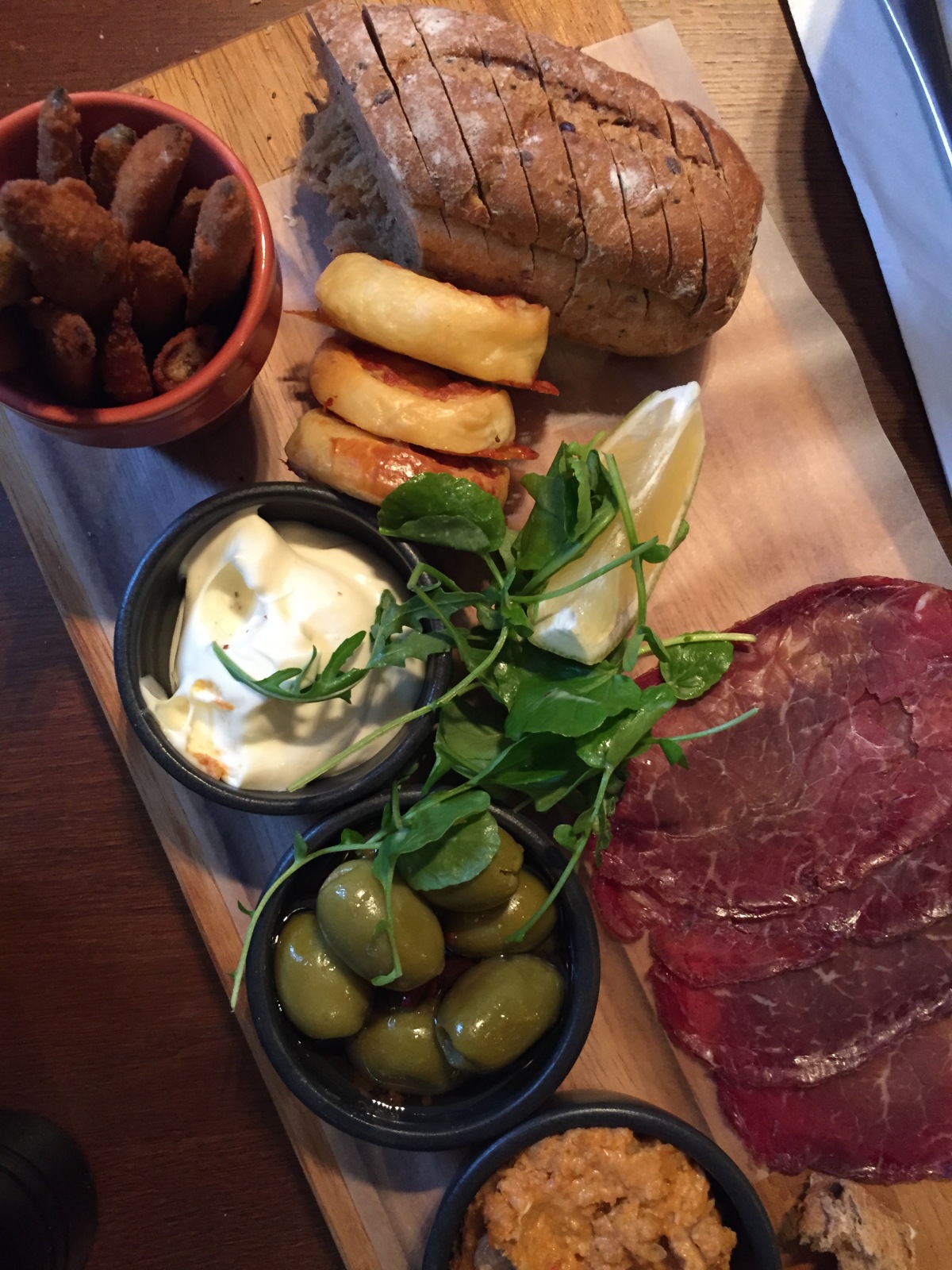 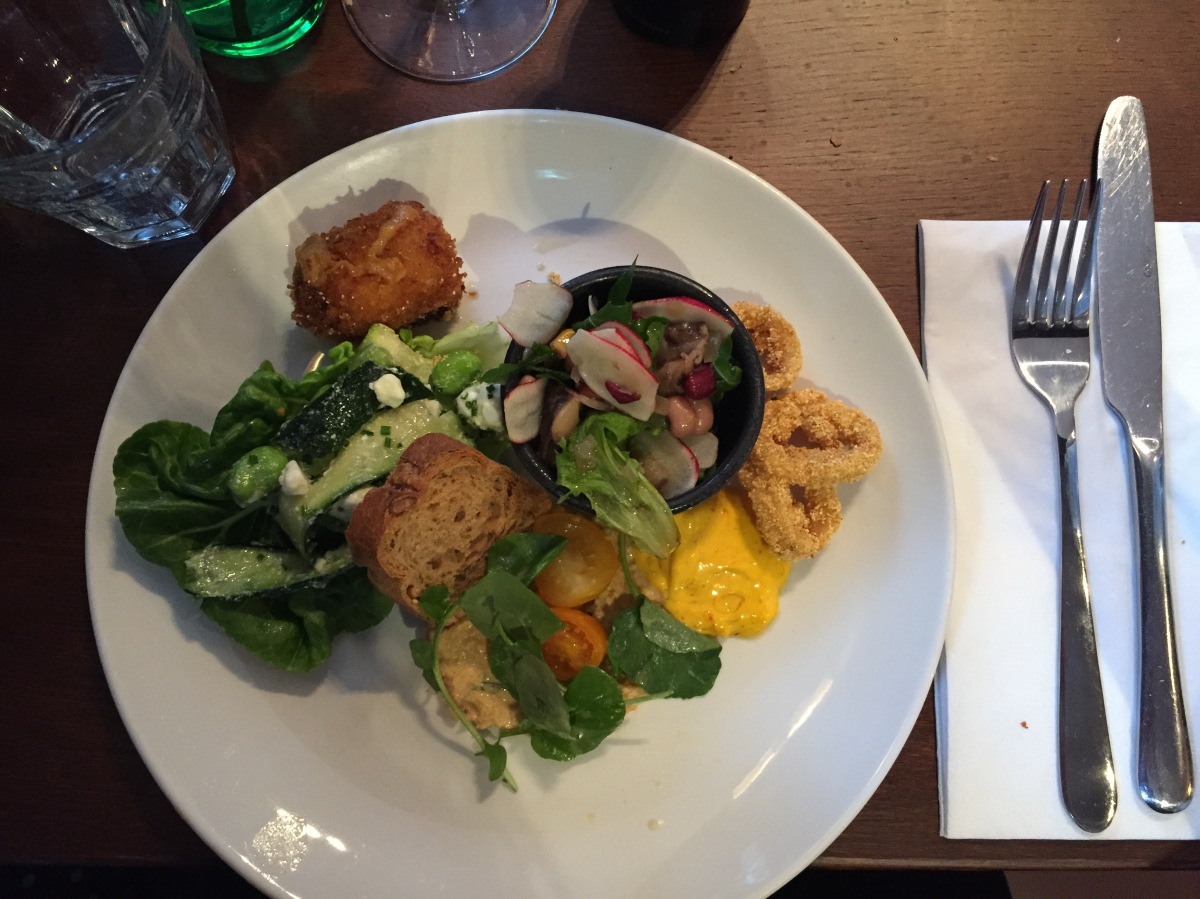 The croquette was tasty, nice and cheesy but sadly there wasn’t any tomato chutney served on our plates, I think the croquette with the chutney would have been dreamy. The aioli wasn’t to my taste and not the predictable accompaniment to squid but the star of the plate was that modest mushroom, bean and radish salad with a golden beetroot dressing. It was very tasty and I could have easily polished off a full size portion. 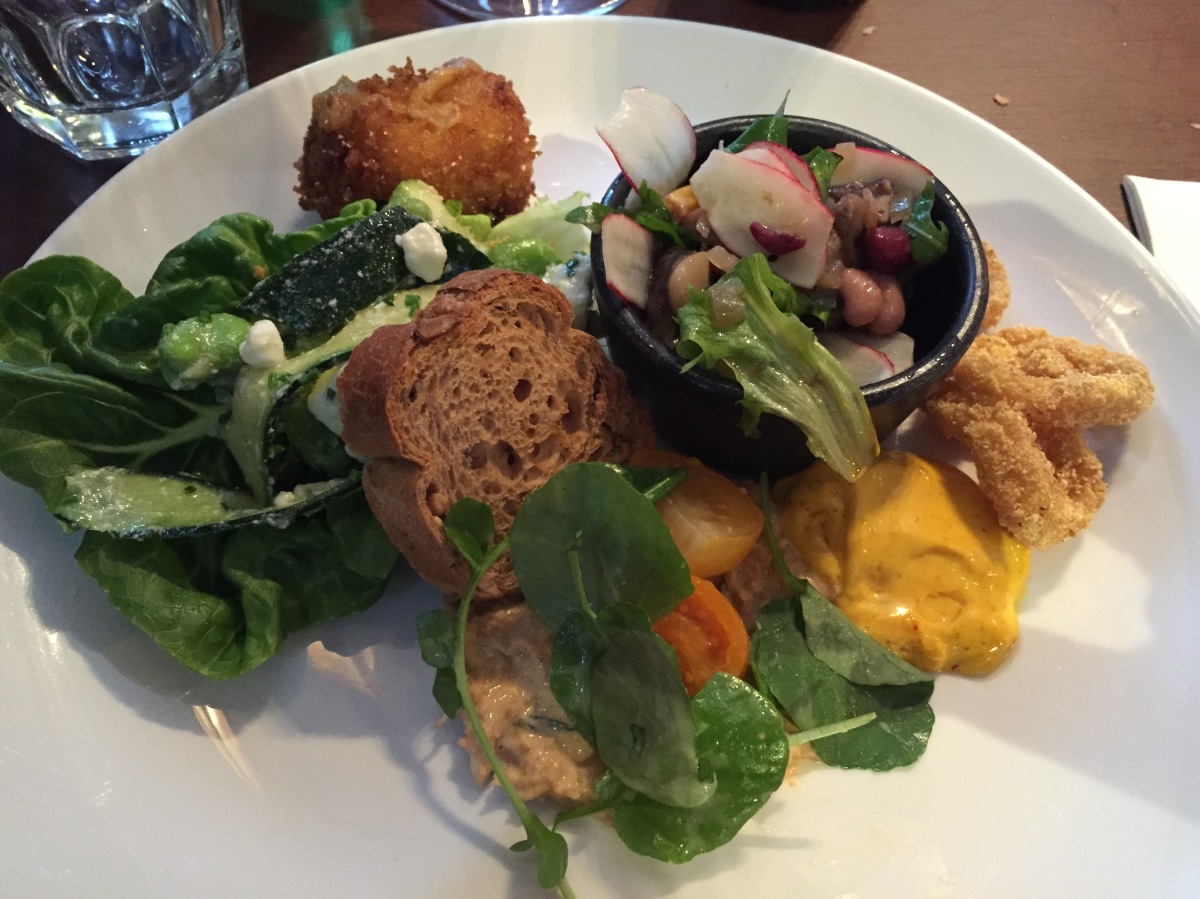 For the mains. Thankfully to avoid an obscene mixture of sauces mixing on one plate, we were first served the Roasted Cod Fillet, King Prawn & Cauliflower Thai Curry with Coriander. This was extremely tasty. The fish and prawn were both cooked to perfection and the Thai curry was fragrant and full of flavour. I must note that on the new main menu, the dish is advertised as a Roasted Hake Fillet just in case you come in asking for the Cod Thai curry! 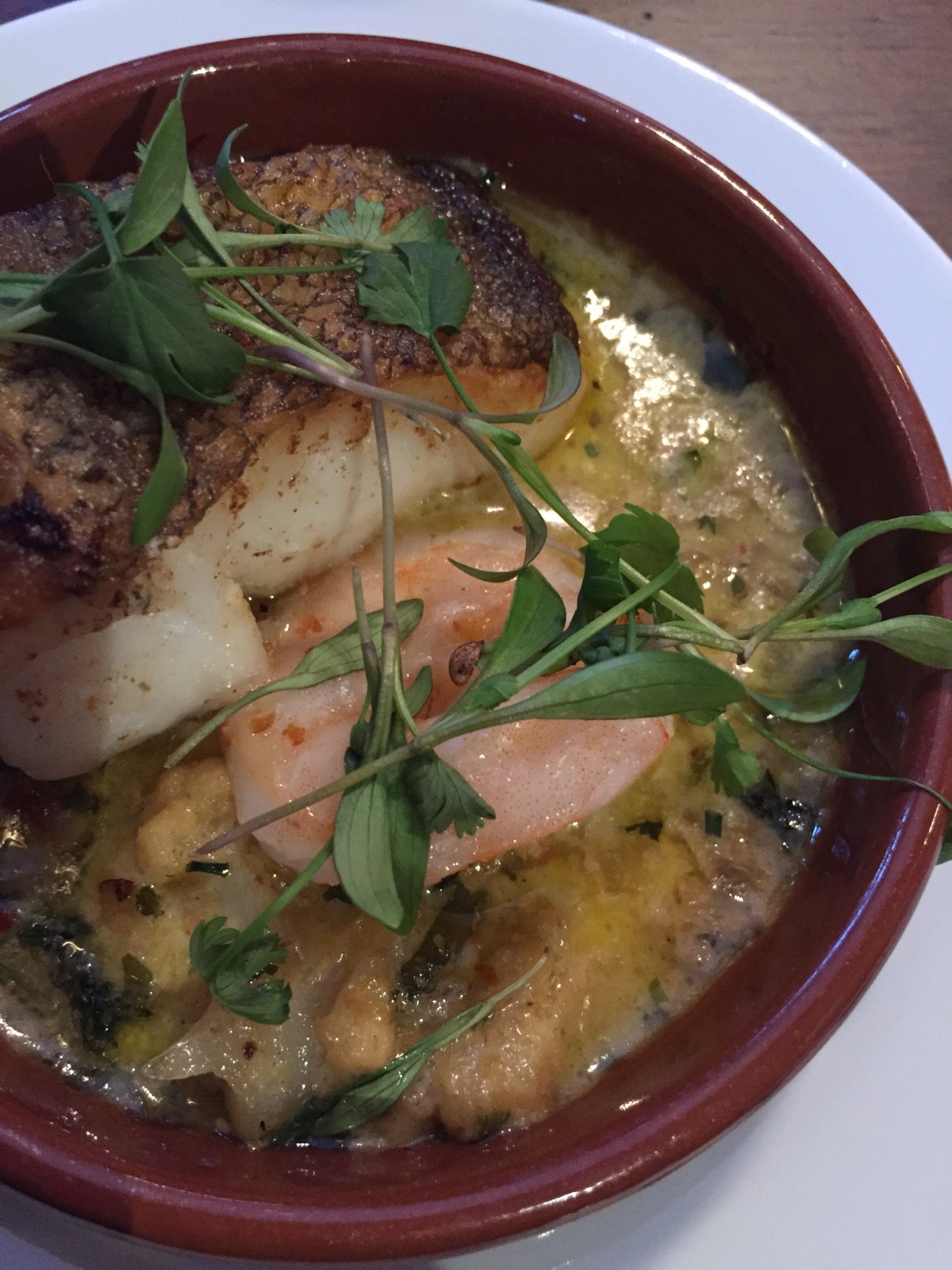 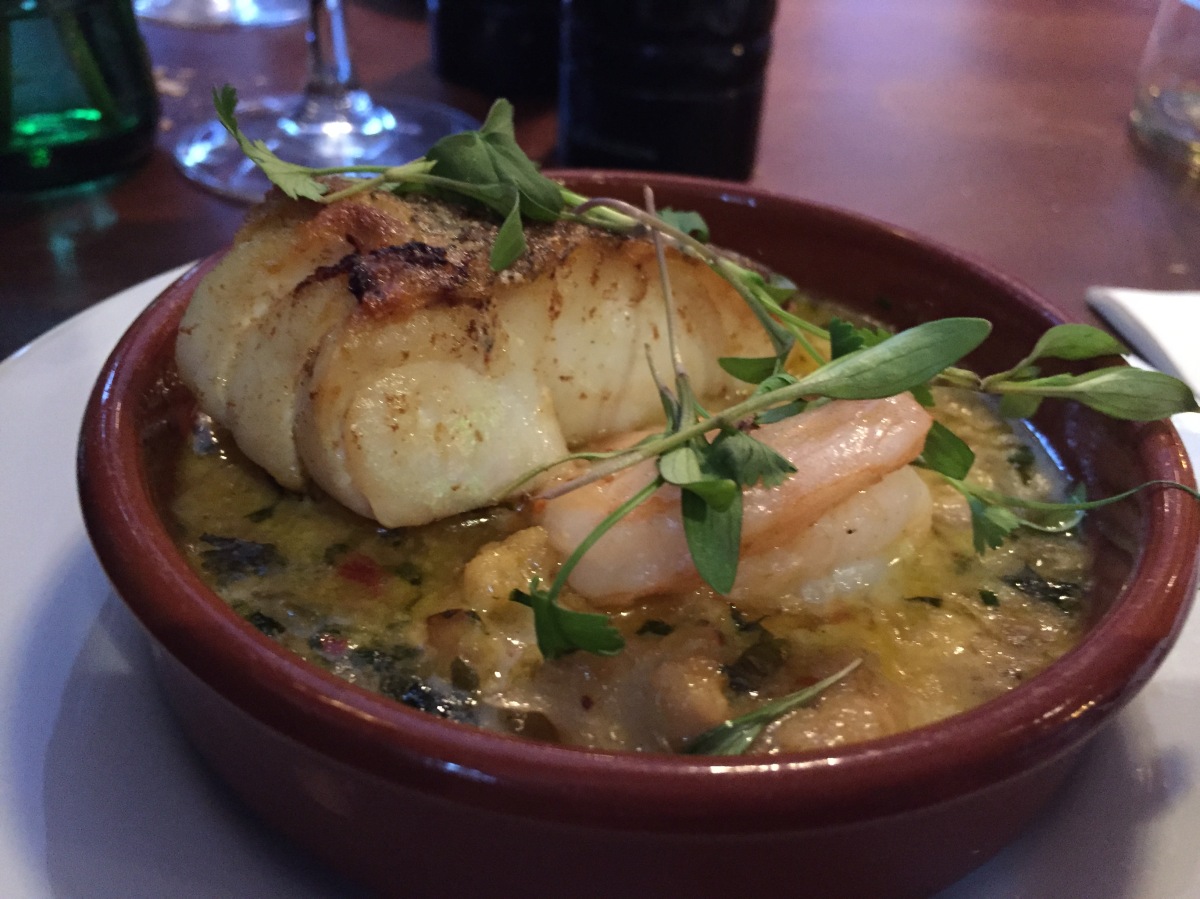 Second part of the mains was presented on one plate and was tasters of the Tomato Tart Tatin, Spinach & Sunflower Salad and the Slow & Low Welsh Lamb Shoulder, Heritage Tomato & Sugar Snap Salad with Salsa Verde Dressing. 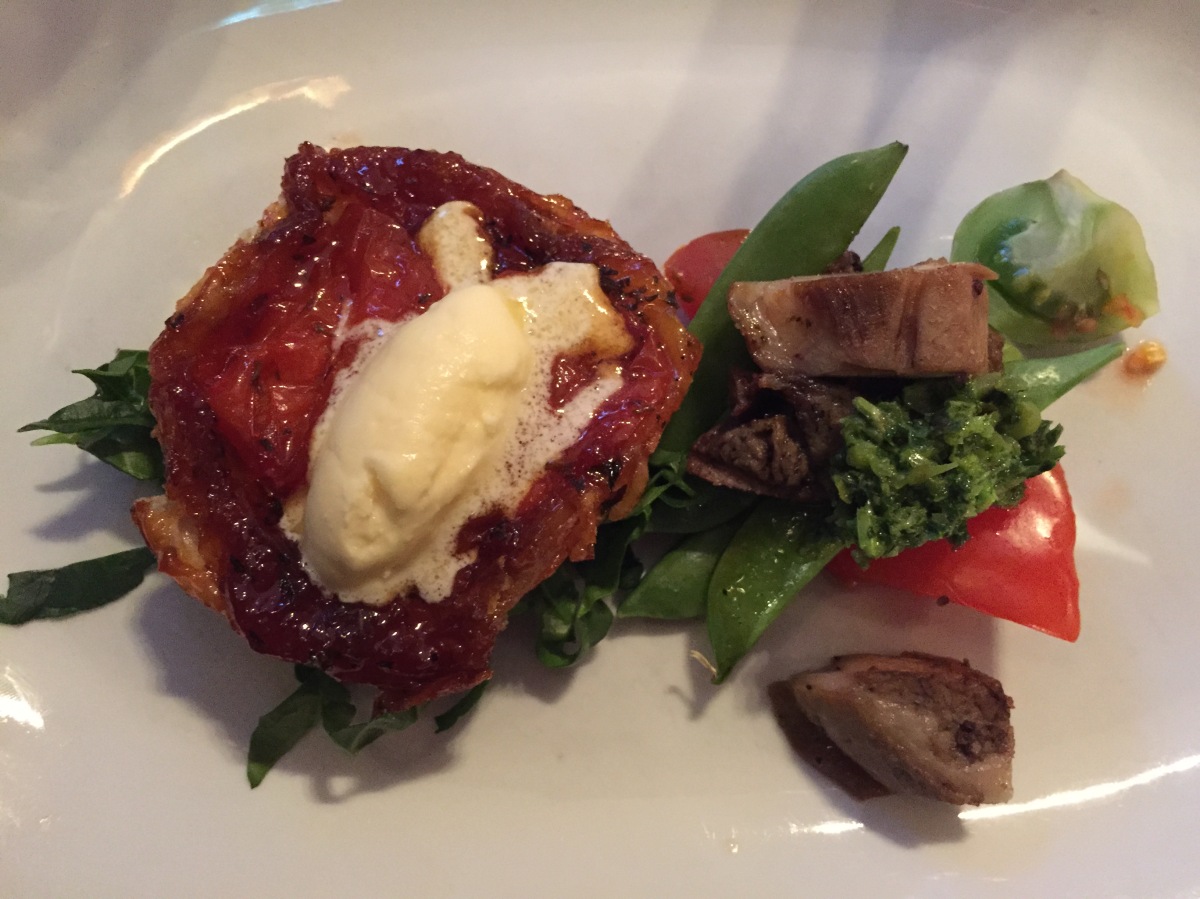 Lamb was brilliant with the Salsa Verde and the sugar snaps and tomatoes. It felt fresh and summery and not at all heavy. The Tomato Tart Tatin was sweet! It tasted caramel sweet but with the goat’s cheese cream it felt much more savoury.

Then came my most favourite course of all. The pudding tasting plate. Or should that be the “tasty pudding plate” either is true and works for me. 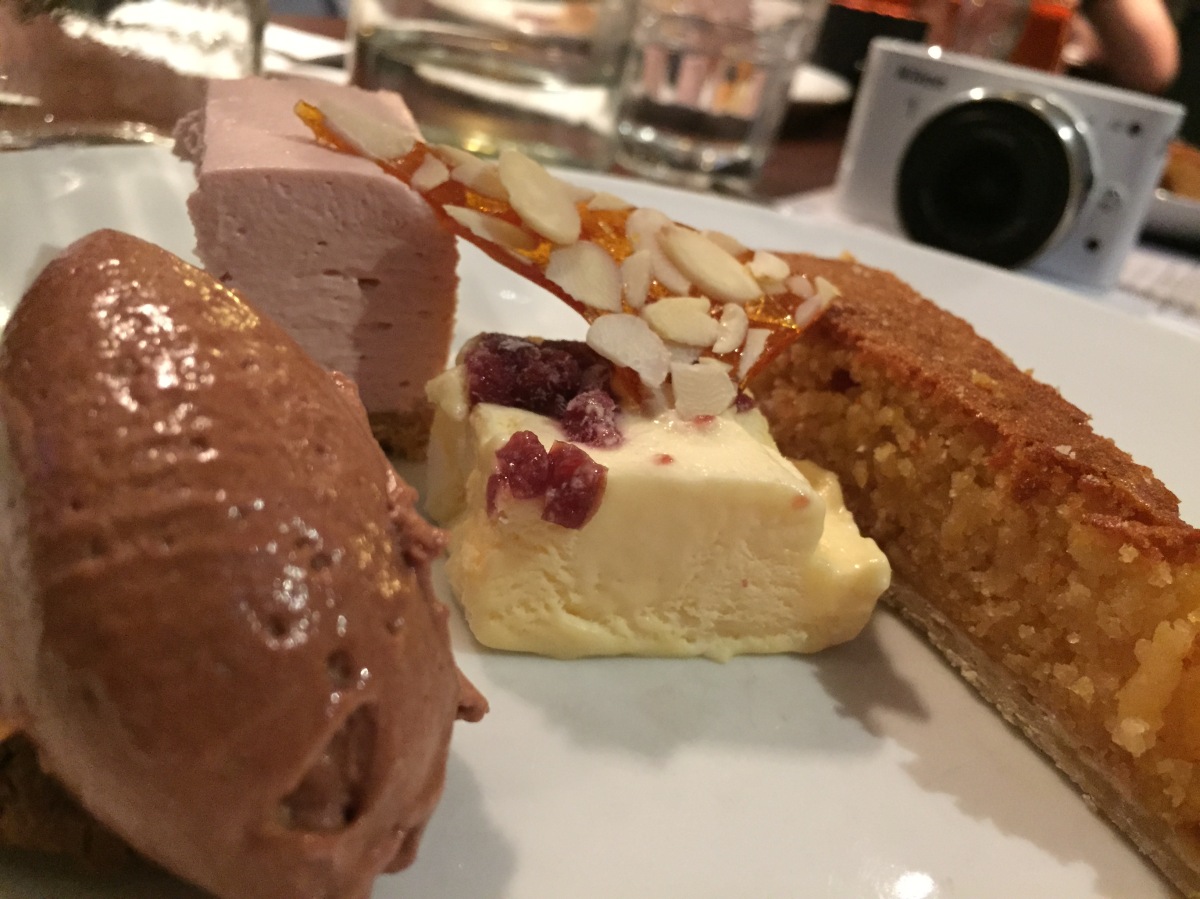 I was in heaven. Everyone knows I love desserts but the Iced Cherry Parfait was mouth-wateringly amazing. The Cheesecake great, light and whipped with the most beautiful flavour of strawberry and the treacle tart with that ginger Chantilly was hypnotising. I was worried before the desserts came out that I was going to struggle to fit any more food in my tummy but I’m embarrassed to say I cleared my plate. The Valrhona chocolate mousse was probably my least favourite but I don’t tend to ever lean towards loving chocolate puddings, it had a lovely raspberry flavour in it and the pecan cookie gave it crunch but next to the others it faded away into the background.

You’d think after all that our eating extravaganza was over but no, it wasn’t. Next up was a Cheese Board to share. On the board was cheeses called Tor, Camembert Gillot AOC, Sheep Rustler, Double Barrel Poacher and Blue Monday. 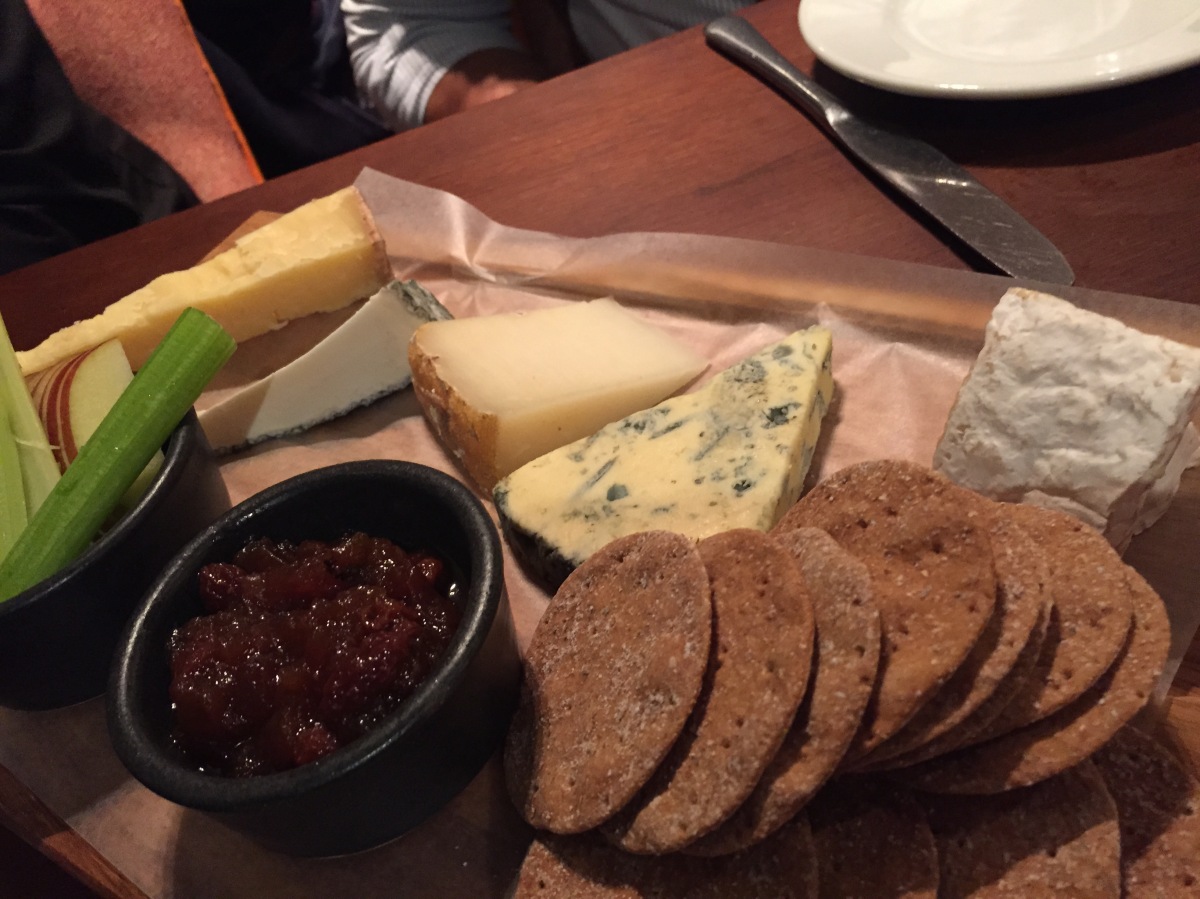 Amazing to note that the Blue Monday cheese is made by Alex James, the bassist from Blur who stole much of my heart in the 90’s! The Tor goat cheese is also award winning having won Best Goat Cheese at the British Cheese Awards 2015. So you’re in good company.

As I am pregnant, I have to tread carefully where cheese is concerned. Particularly if they are soft or unpasteurised as they could contain dangerous bacteria. So sadly a mix of not being able to fit another thing in my tummy and not wanting to take the risks with the cheeses meant I can’t say much about them, other than everyone else was tucking in and making lots of mmm sounds.

Then after hearing a few words from the Head Chef Harry and his Sous Chef Neal (who had recently won second place in the Chef of the Year competition!) it was time for home clutching our goody bags which were filled with crunch pecan cookies! 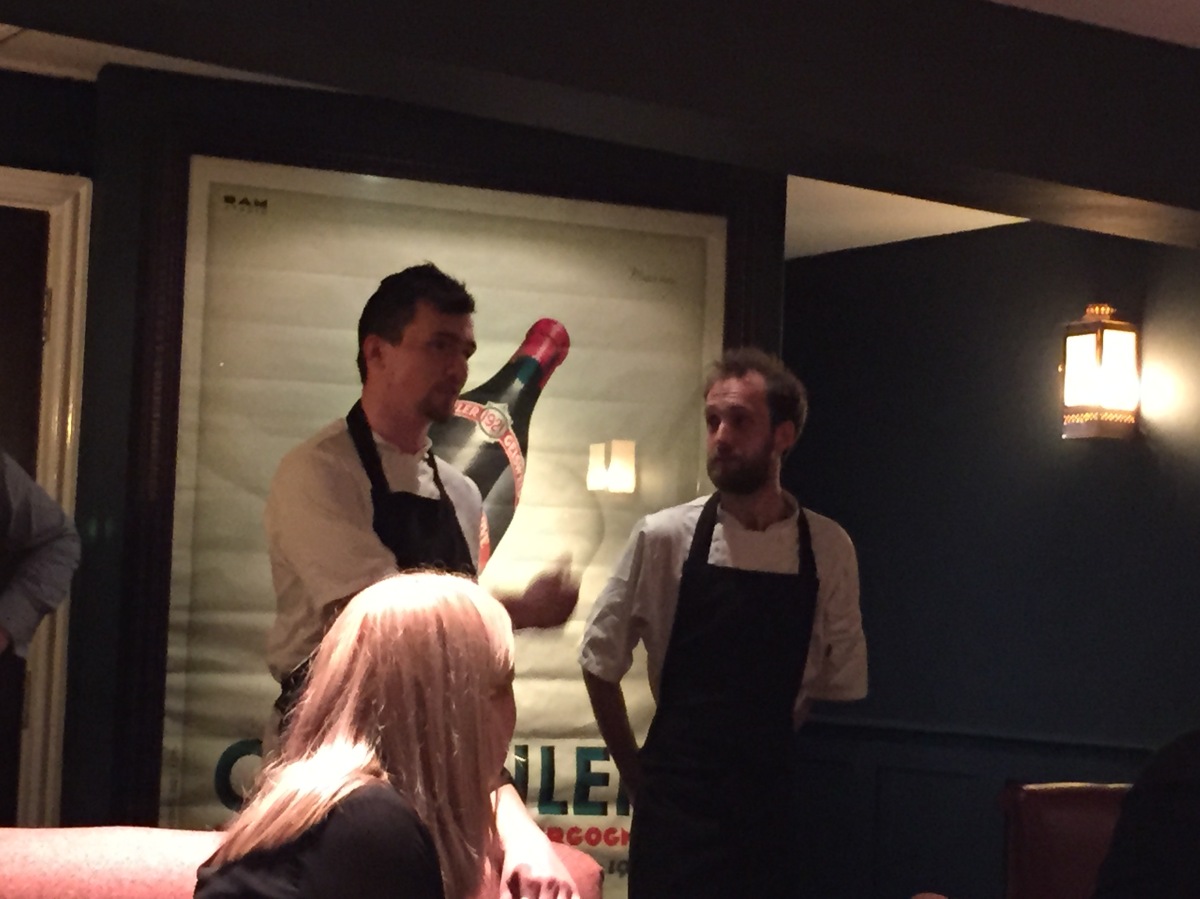 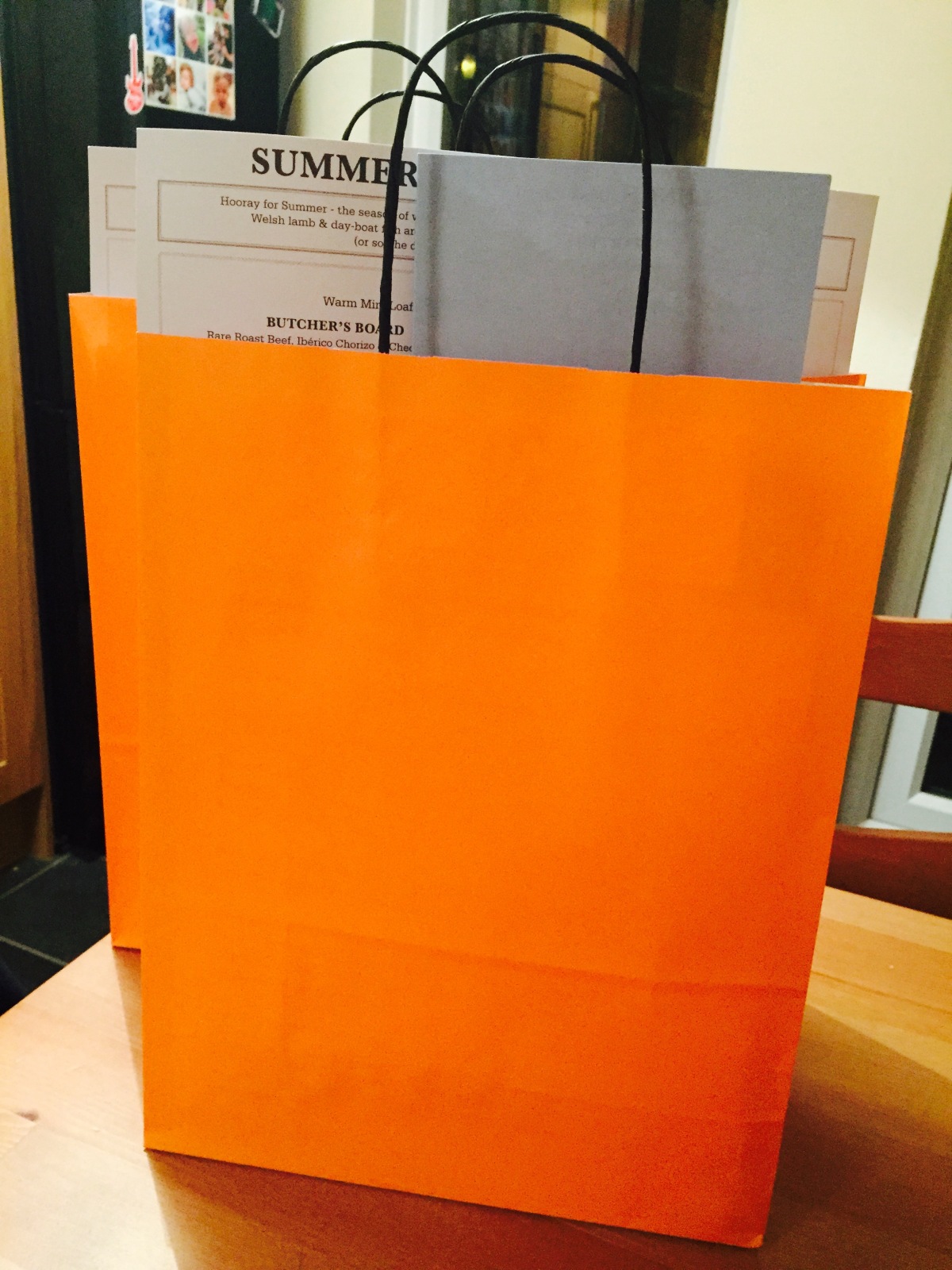 What a lovely evening at The Black Horse Woburn, it won’t be my last, that’s a definite and I can’t wait to see some of these dishes in their full scale masterpieces.