It may only be the 11th November but now that I’m a parent, I’m older and just ardently more organised (or try to be), you might understand why I’m all for getting the Christmas show on the road asap.

Since my little boy was born we have always attended Santa’s official arrival at the centre:mk and over the years we’ve seen all sorts of things occurring at Milton Keynes’ shopping centre. There’s been real reindeer out in the car parks by Marks & Spencer, snow falling in Queens Court and tons of pantomime stars visiting from the local MK theatre.

This year the public were told to gather in Queens Court (same place as last year) at 5pm for Heart Four Counties Breakfast presenters Stuart & Katy to light the Christmas Tree and await Santa’s special arrival. 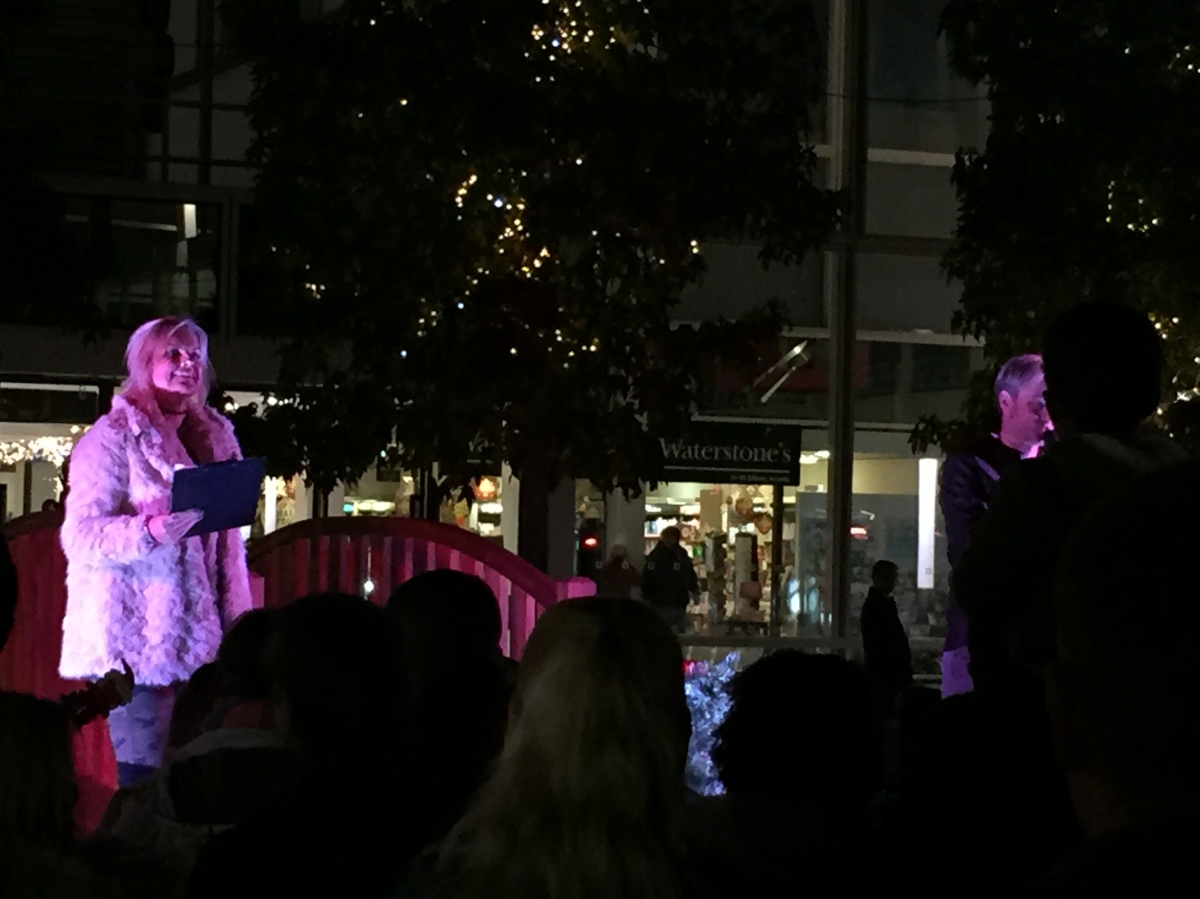 Stuart & Katy from Heart Radio entertained the crowds that had gathered, taking breaks for the local brass band to perform. I wish the brass band had been set up with microphones as they were a little on the quiet side and I do adore hearing a brass band at Christmas.

Members of the cast from this years pantomime Dick Whittingdon at MK Theatre joined Stuart and Katy on stage. One even sung “All I want for Christmas” made famous by Mariah Carey.

Then there was the big countdown for lighting of the Christmas Tree, straight afterwards guess who appeared on top of the roof of the centre:mk? Why, Santa of course! He must’ve landed his sleigh up there and spent a good few minutes waving to the crowds before descending and appearing in his sleigh in the main shopping arcade for his procession up to Middleton Hall.

After following Santa’s grand procession up to Middleton Hall and his home until Christmas Eve in his Grotto-come-Igloo, my family and I were so lucky to be invited into the grotto to experience what exactly is in store for all thousands of children who will be visiting over the coming weeks. 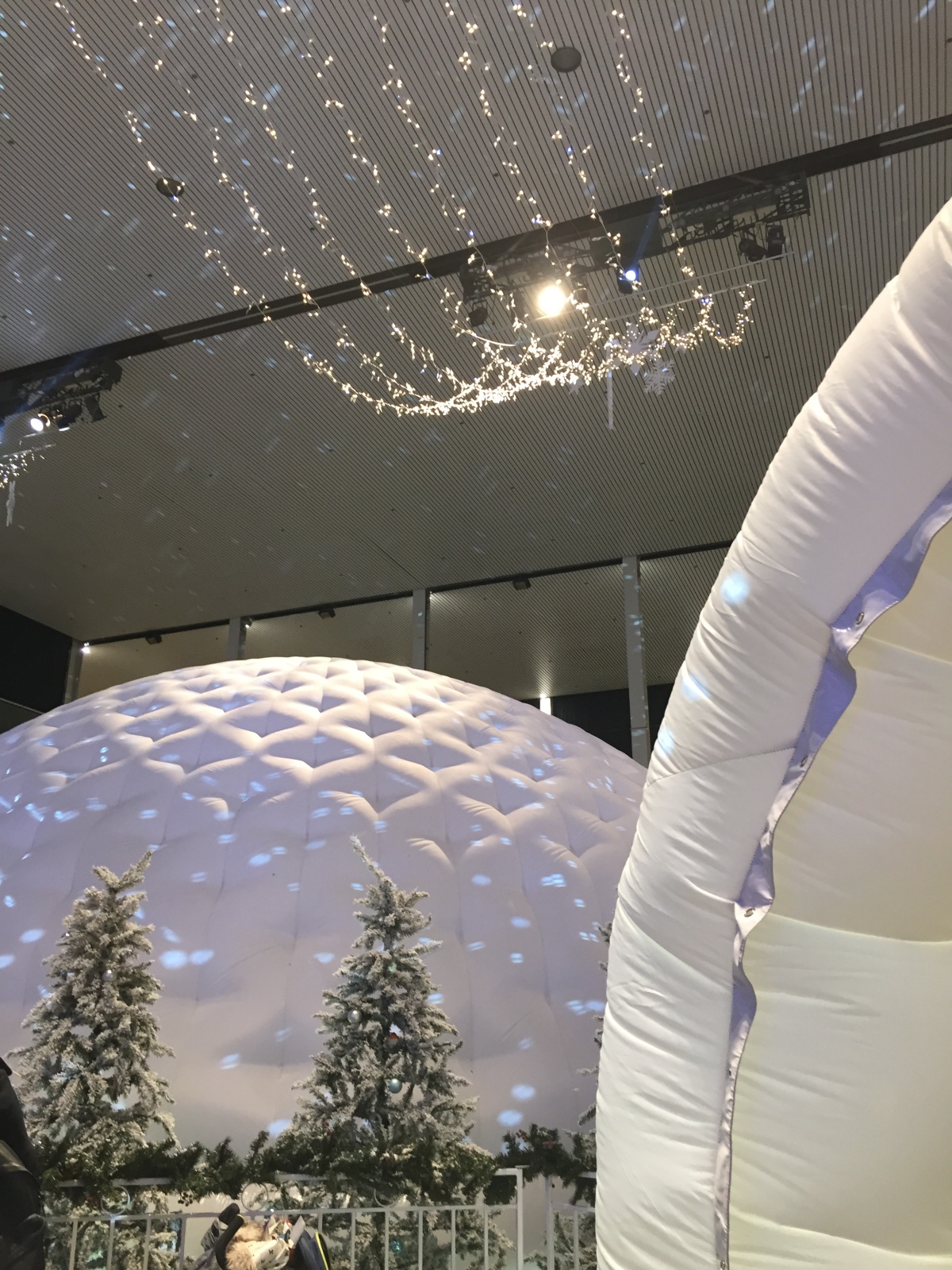 We queued up outside the Igloo and were then greeted by a couple of very cheerful elves who lead a large group of us into the first room of the grotto experience.

There was tables and tables set up with crafting materials and children were invited to take a seat and there was space for adults to sit in the middle by a lovely Christmas tree or to stand with their child (if the child was too young to be on their own). 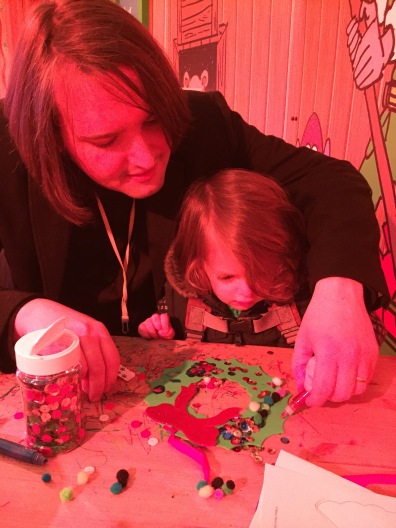 The elves gave instructions to the children for them to start decorating their felt decoration in the shape of a wreath that was laid out on the table for them. There was a great selection of glitter glues, buttons, sequins and pom-poms to use. With Daddy’s help even our little monster had a great time making his wreath which I think I am going to treasure for the rest of time.

After completing the decoration it was time to decorate a Christmas card with an angel on the front. There was tubs of white feathers on the tables which was perfect for the job. Children were even given an envelope so they could use the card to give to someone this Christmas. So lovely.

When all the children had finished the group was lead through a big magical-looking door that took us into a snowy themed room with a large tree adorned with disco balls (little random but pretty all the same). The path led around the tree in a circle and created a queue to see Santa. 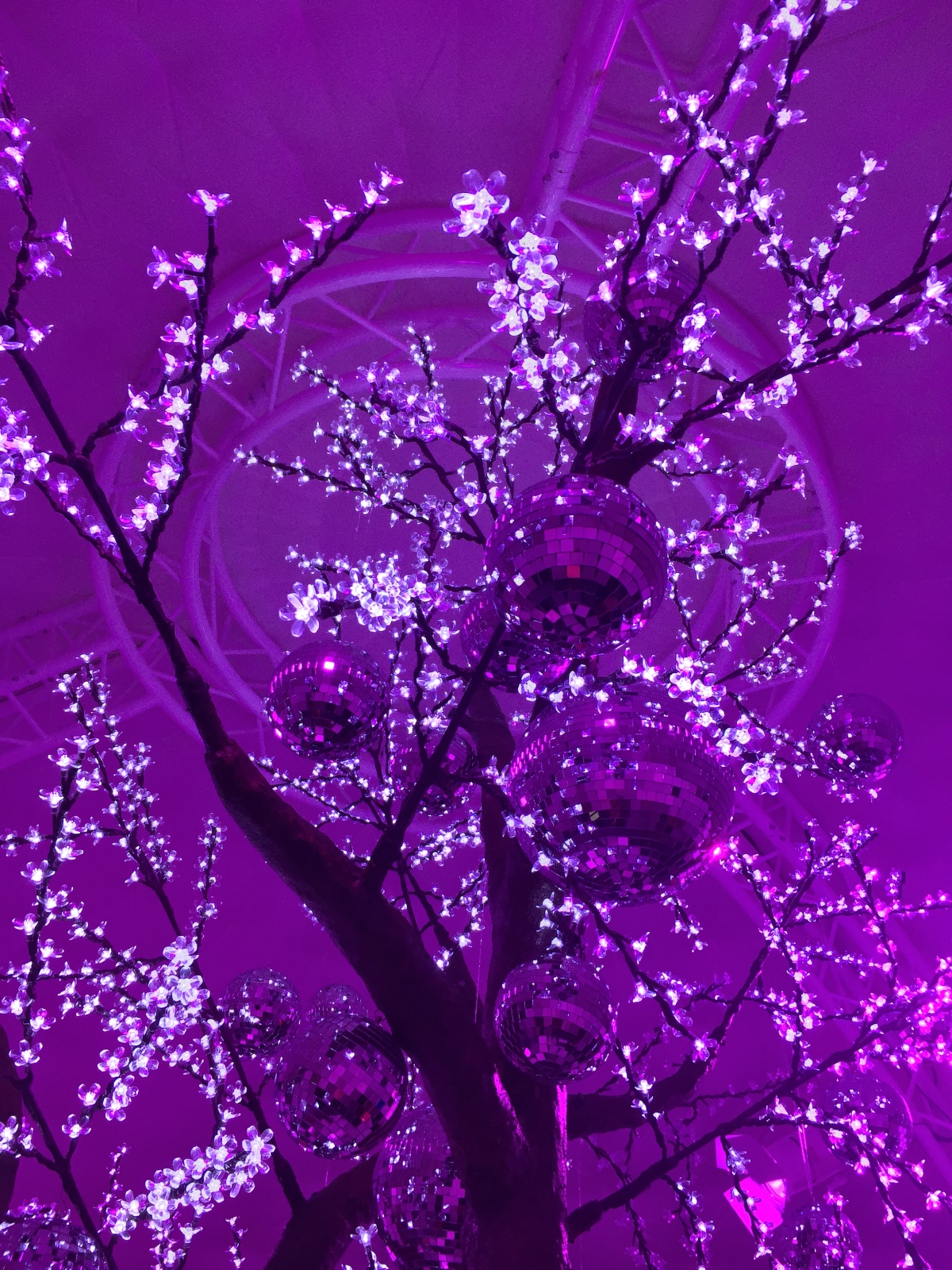 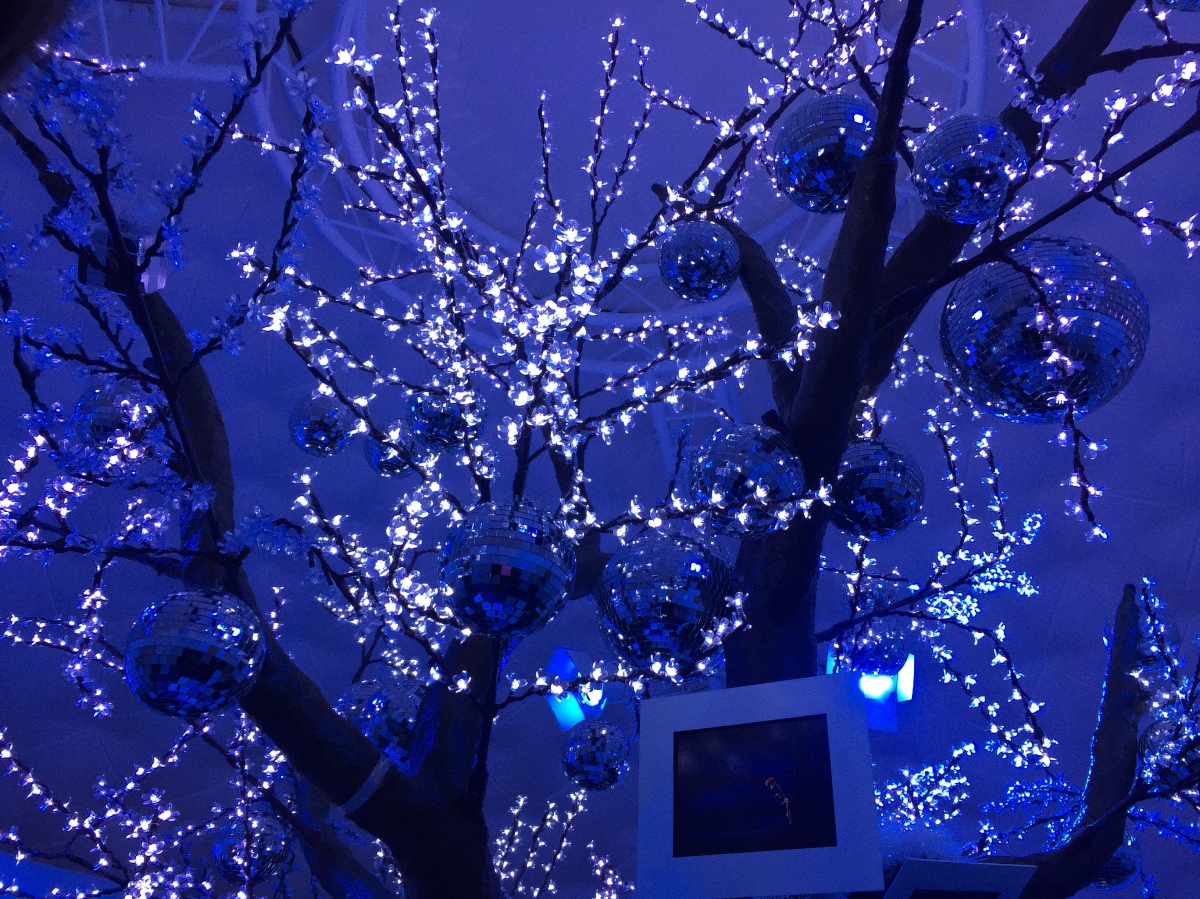 I liked the use of TVs and small screens showing cartoons on them as well as music which were great distractions from the queuing (especially for the children).

Then it was our turn at the big door which we knew held Santa on the other side. Our little boy paused to take a photo with the cheerful elf that was letting guests through. 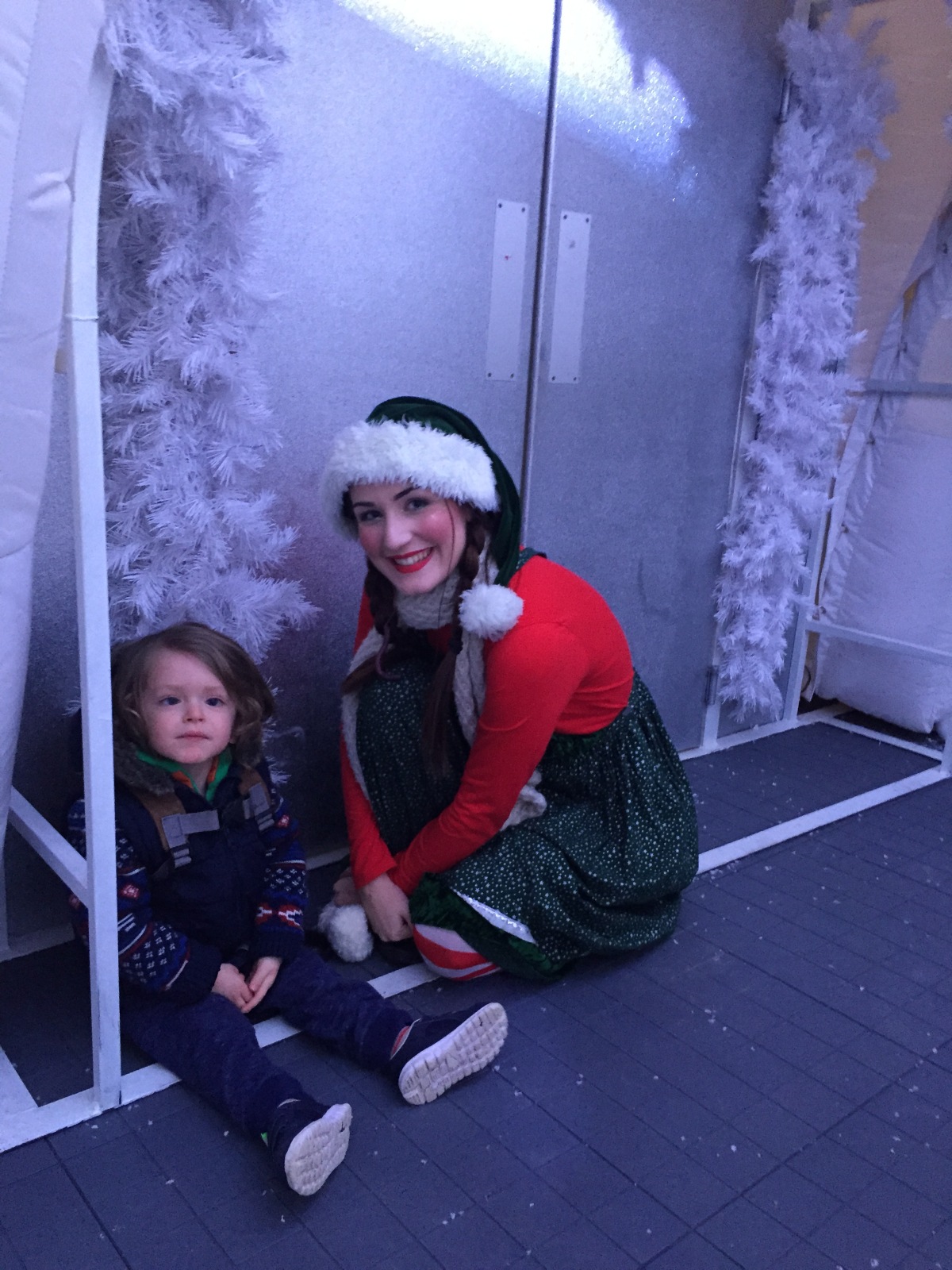 We then had some wonderful time as a family with Santa Claus (although our two year old was more interested in everything in the room BUT Santa). Santa gave him a wrapped up present and spoke to him before we all posed for a photo.

Outside the grotto before you leave there’s a kiosk to see your photo and have the chance to buy various packages that include personalised items adorned with your Santa photograph. 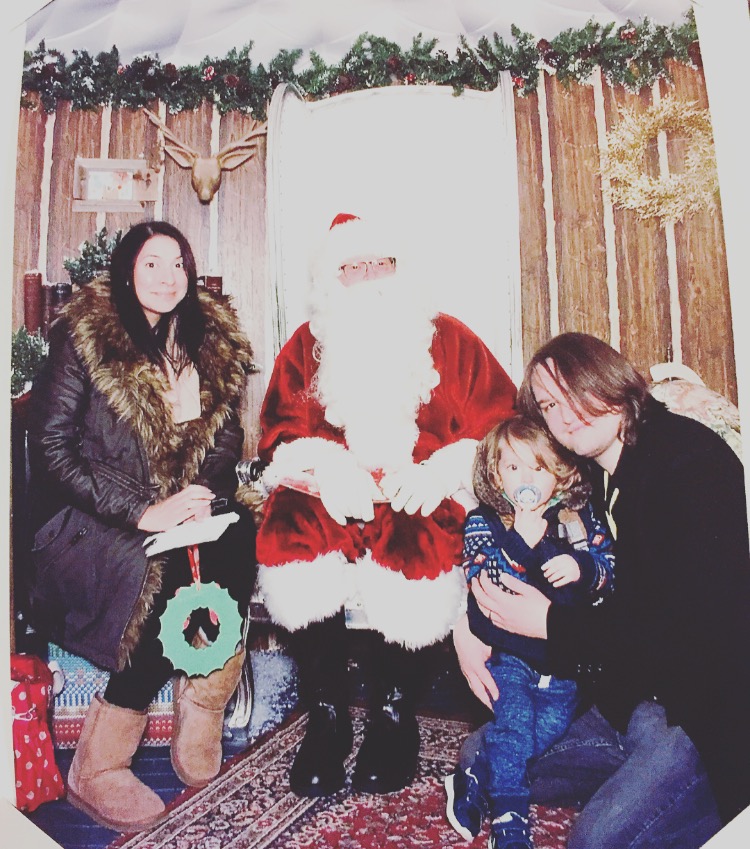 For £7 I purchased just the print, which is fine for me but you can choose all sorts of ways to have your image replicated.

Aside from the Santa’s grotto experience in Middleton Hall there is a carousel and a small train which both cost separately. There is also the small Christmas market stalls which have been appearing year after year there now and a traditional nativity scene.

We didn’t have time to check out the carousel or the train as by the time we left the grotto it was definitely time for our little monster to go to bed but it’s nice to know we have more to explore and experience with him in the coming weeks.

Would I recommend the grotto at the centre:mk?

You only pay per child for the grotto experience which makes the centre:mk quite appealing when you take into account the crafting time, length of the experience and the gift from Santa. Photos aren’t included and you aren’t allowed to take your own so £7 is an additional cost if you want a keepsake to takeaway with you.

My little monster really enjoyed the craft time and although he was oblivious to Santa, it meant a lot to my hubs and I to see Santa meet him.

How much is it?

(Prices include a booking fee)

Prices include entire grotto experience including crafts and a special gift from Santa.

Please note: due to space restrictions within the experience, a maximum of two adults are allowed per child

Due to health and safety requirements, children must be accompanied by a paying adult on the train.