Bringing new meaning to a proper cup of tea…

My Visit to T2 @ the centre:mk Milton Keynes

To me, there are only two kinds of people in the world. Those who drink tea and those that are missing out.

But whilst I always shun coffee and even side-step hot chocolate (don’t all gasp at once) in favour of a piping hot cup of char, I am by no means an expert on it. So I felt a bit embarrassed when an invitation to a tea masterclass at local loose tea store T2 popped into my inbox. T2 opened last year at the centre:mk shopping centre in Milton Keynes but I had never visited. I guess you could say, this girl was stuck in her mug-shaped ways!

So, what did tea mean to me before I visited? Tea came in two forms. A bog standard supermarket tea bag of black tea and for very special occasions, it came in the form of a loose black leaf tea from a luxury London store.

I was introduced to the loose leaf stuff through meeting people who drank loose leaf and although their selections of tea were huge, I always stuck with black tea as my inexperience shone when asked the question, “what tea would you like?”. I would hastily and clumsily say “just normal tea, please” which in turn would get a sympathetic nod from the tea giver and there was my rut. Whoops!

Anyways, enough embarrassment. T2 is a loose leaf tea shop. And like a lot of other prestigious brands, the centre:mk welcomed them to open a store in Milton Keynes last year. The only T2 store for some 50 miles around us. (Gawd, I love MK). 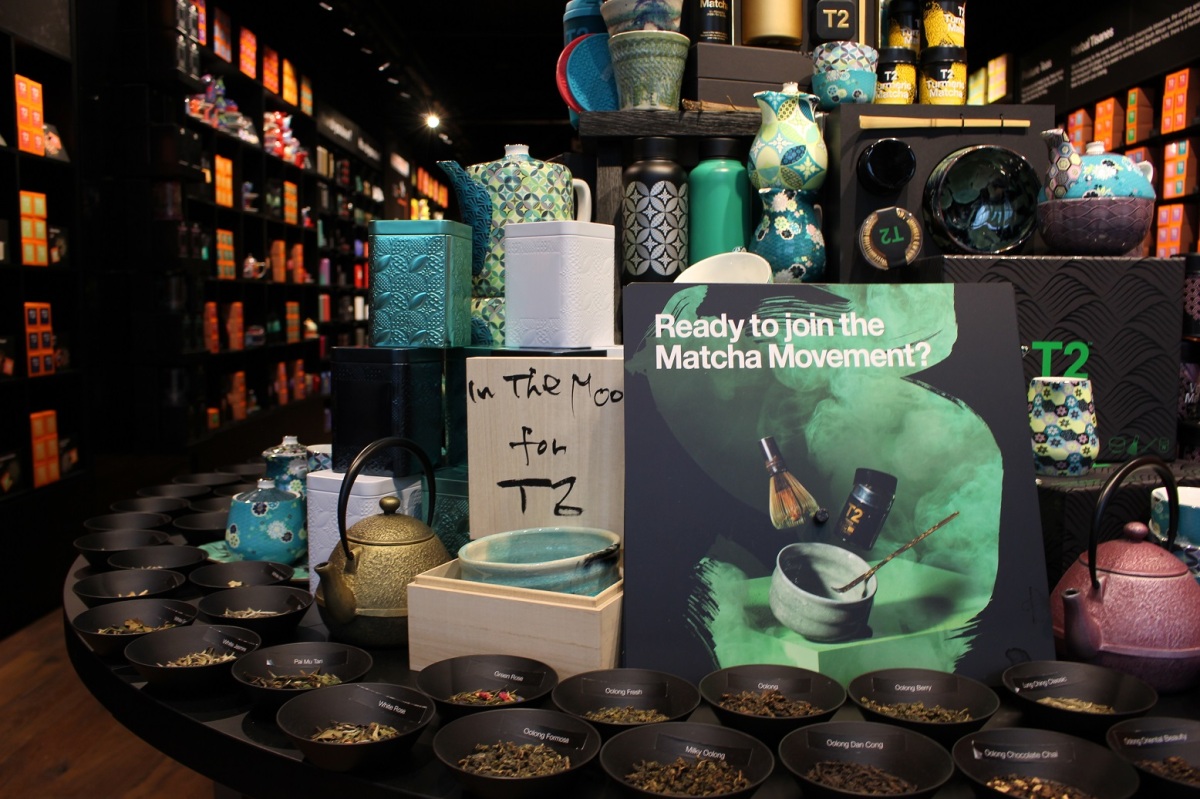 You can find them situated near brands L’Occitane and Cath Kidston on Silbury Arcade (to people of my age, along from where Chappell of Bond Street used to be).

Inside T2 there are some 200 types of tea to choose from. INSANE! Meaning you could try a different type of tea per week and still take years to discover them all. 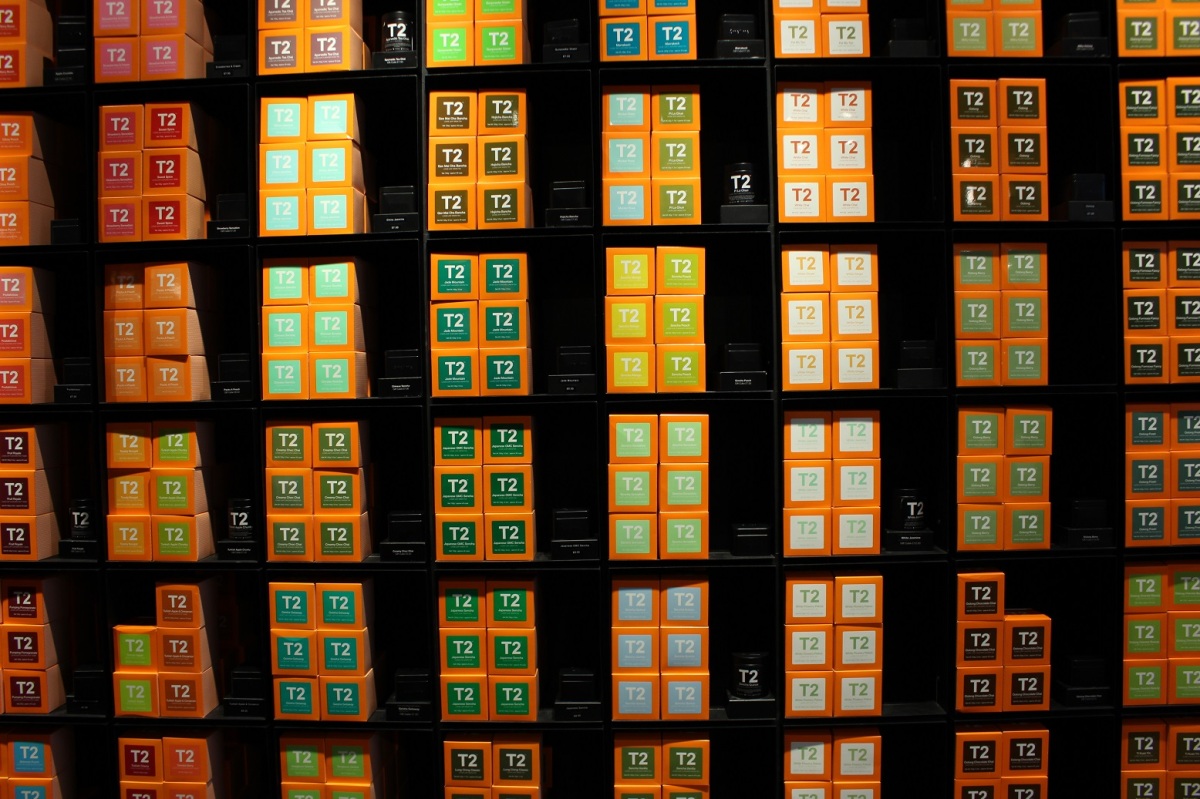 After hellos and welcomes were over, tea was of course hot topic.

First up to brew and taste was a black tea called Baxter’s Buns, which comes in the most beautiful box! 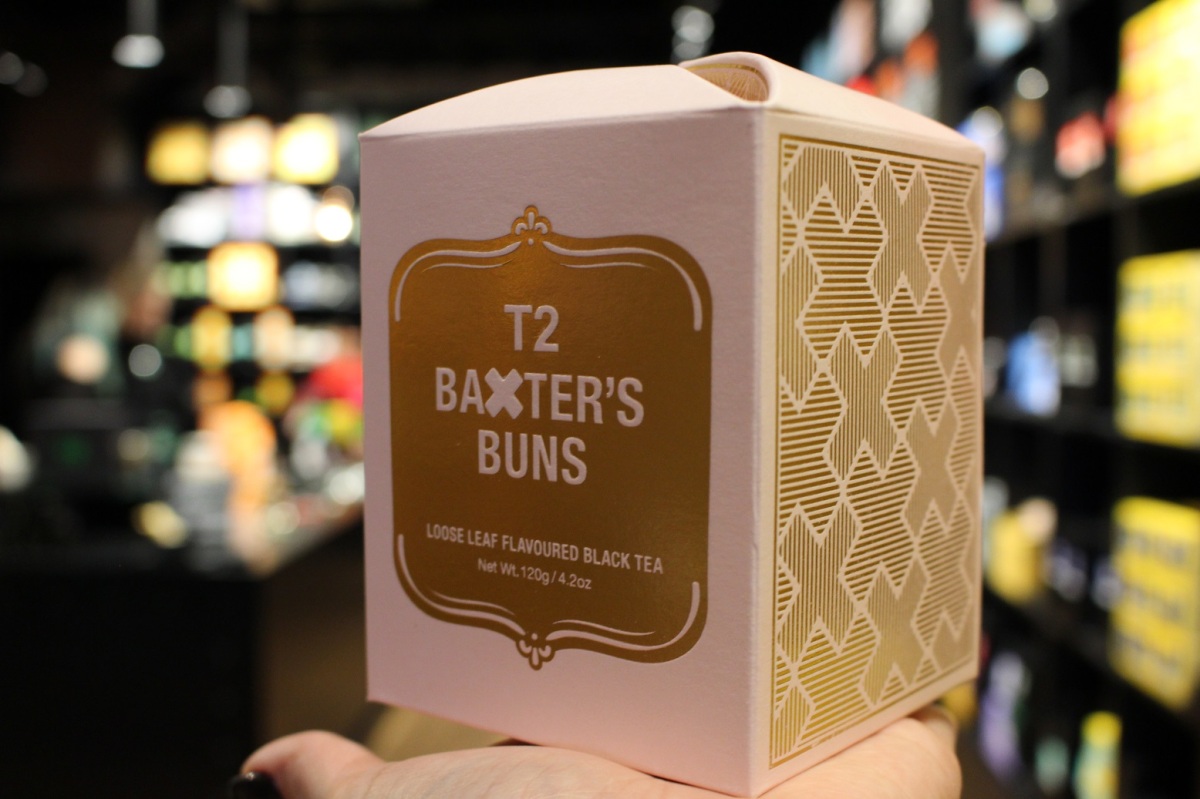 Baxter’s Buns smells and tastes exactly like hot cross buns. It tastes doughy, fruity and spicy and gives you everything you would expect from tucking into the Easter treat but like most teas, you don’t have to worry about the insane carb or sugar overload. This makes it oh, so appealing. I also reckon this tea would drink insanely well-suited near Christmas too, as the warming cinnamon mixed with the currants and orange peel flavours make it taste very festively suited too.

My previous experience to brewing loose leaf tea was to use a tension/springy tea infuser inside a mug (fiddly!) or in a teapot with a strainer being shared and shared about (and inevitably a mess made)  but today I was introduced to this big jug thingy much like a cafetiere which was brought out to make the tea.

I said it was like a cafetiere but I could see no plunger or a lip in which to pour it like a jug, so instantly I was wondering how it was going to work.

Hot water was filled into the tea brewer and then the tea was spooned in and left to brew.

What comes next is pure MAGIC! Gadget lovers you must pay attention! (Note video showing Packs A Peach being served).

This device works no matter what size cup you are using. Even working on the teenie tiny sample cups that T2 use for customer samples or the largest glass mug as shown on my video!

With the tea pouring out the bottom of the jug, I kept trying to move it around the worktop to see if it would spill and trust me, not a single drop of tea was left on the surface. I’ve never seen anything like it before and it’s now on my must-buy list for 2017.

Another tea that was also brewed up to try was a fruit tisane called Packs A Peach (tisane means a herbal/fruit tea).

This was the fruitiest-fruit tea I’ve ever drunk. Fruit teas (in tea bags from the supermarket) usually meant epic smells but poor taste, as water used to be the predominate flavour in them, regardless of how long I brewed them. 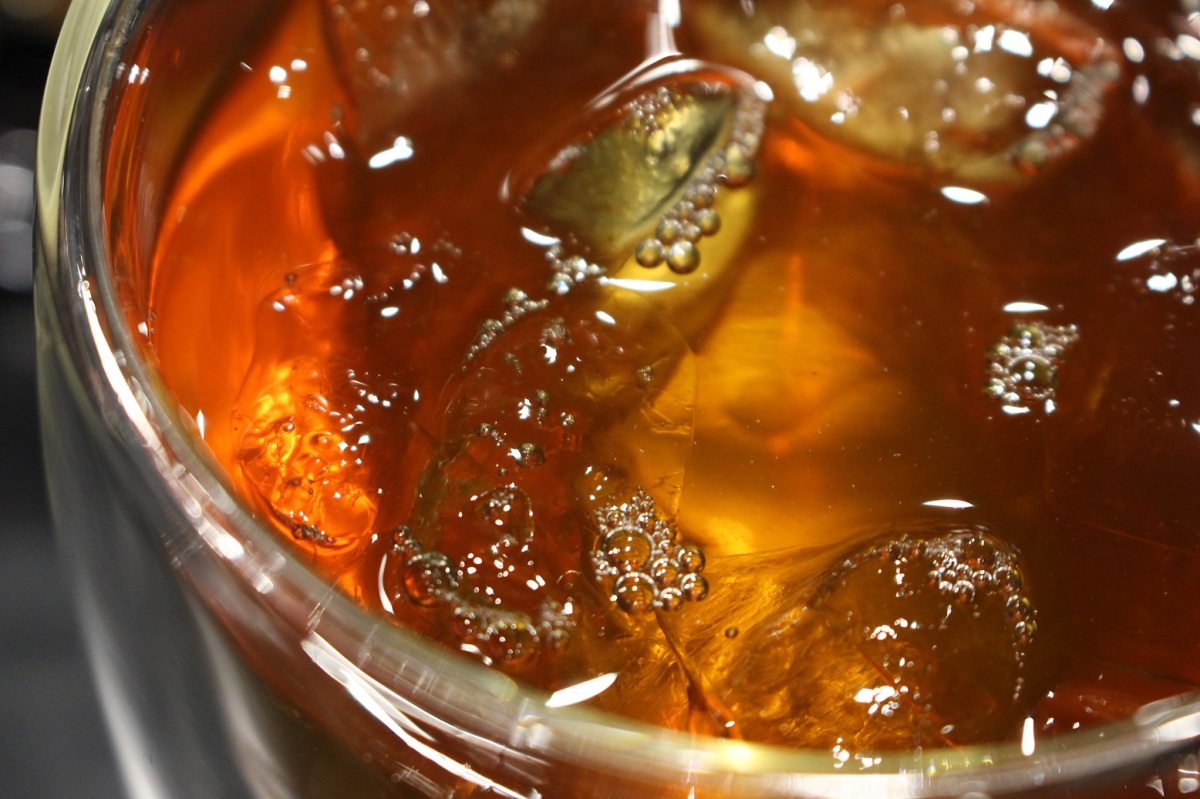 I tried the Packs A Peach hot and also on ice which was insanely good and perfect for a summers day drink and as it’s a fruit tea (tisane) that means no caffine or added sugar is in it and that means no guilt! YASSS! Summer yummies! 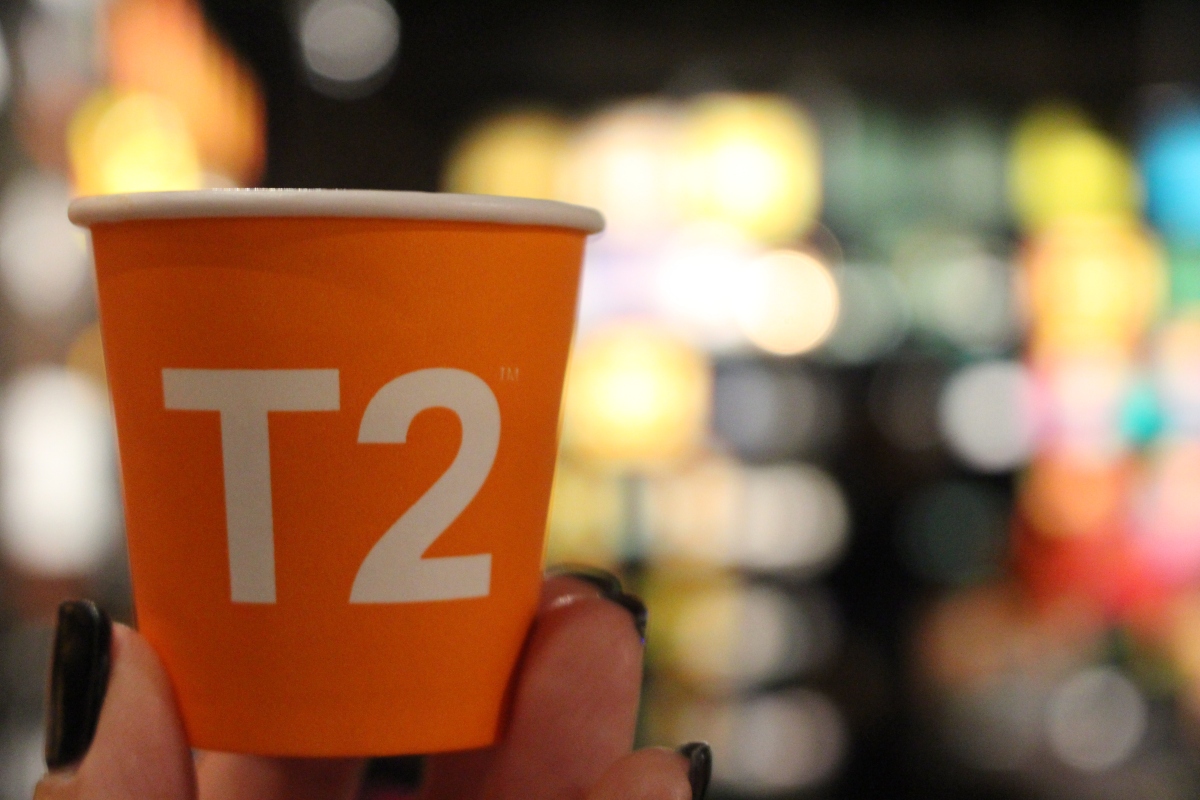 Being a builders brew kinda girl, imagine my blank face when I was told that I was going to be learning all about Matcha tea. Tea expert Georgia was on hand though and explained it’s a form of green tea. I’m sure like me, you’ve all heard about green tea regardless of whether you drink it or not and it’s growing popularity in recent years.

Matcha is a type of 100% organic prized green tea that is available at T2. It’s made from specially grown and then powdered green tea leaves that have been de-veined and de-stemmed before being powdered.

Think of a ‘normal’ tea, like from a supermarket. You take a teabag or tea leaves and place them in boiling water to brew, you then remove the leaves to drink the liquid it leaves behind. Cup of tea.

With Matcha green tea, the tea leaves are powdered down and the whole powder is whisked with a liquid until it’s dissolved and then drunk in it’s entirety. Consuming all the leaf in Matcha  isthought to be therapeutic and ensure calmness of the tea drinker.

So “normal supermarket” tea you drink the water that has had leaves soaking in it for a few minutes, Matcha tea you are consuming the leaves along with the liquid*. Got it! 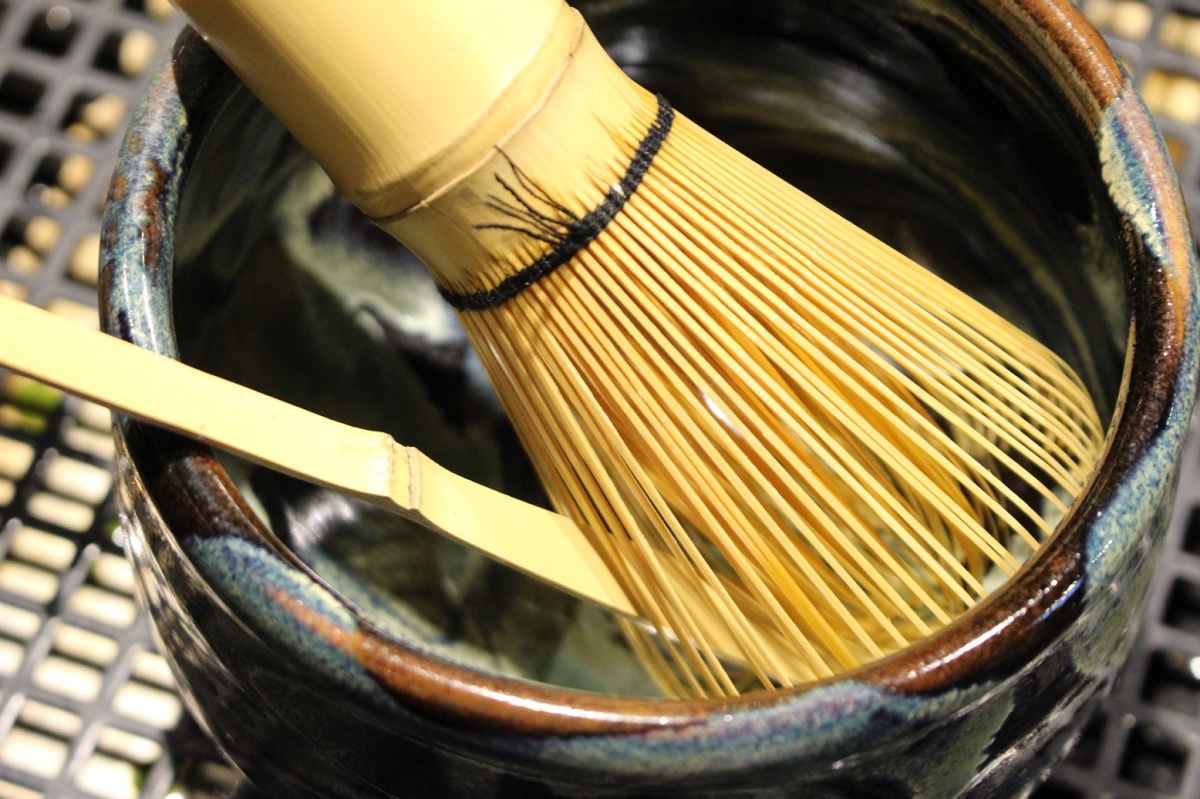 The Matcha can be made with milk or water and at different strengths.

If you are going to make it with water, something to note is the water should not be boiling but between 70-85 degrees c. You can make a thin Matcha tea (Usucha) or a thicker one (Koicha).

The powdered green tea is measured out using the special bamboo spoon into the tea bowl. A small bit of liquid of choice is added and then the special whisk is used to blend it together into the drink which is then topped up with more liquid.

All Matcha tea is known to taste bitter. It’s not unpleasant, but it’s not a cup of normal tea with sugar in it but it does has something quite complex and almost alluring about it. Perhaps due to the really interesting and ceremonial method of preparing the tea. 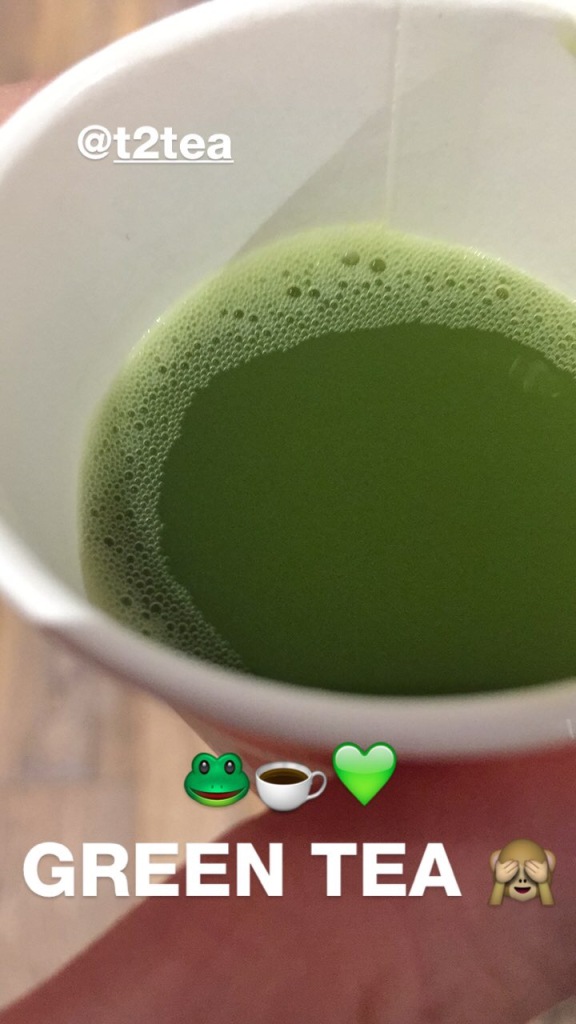 Due to the bitterness Matcha is tradtionally served with a sweet which is eaten before the tea is drunk. I tried this method with a jelly baby at T2. I must say that it didn’t really feel like it balanced the bitterness to me, only drew my taste buds immediately to the bitterness. Much like when I eat chocolate or a biscuit before drinking my usual brew, then complaining as it tastes like there isn’t any sugar in my tea (when there is). Maybe it’s something you need to get used to…?

I tried Matcha as an iced drink made with sparkling water and also prepared with warm Soy milk which was two very different experiences too.

My overall favourite of all the Matcha I tried was the fizzy iced sort. Not surprising as it was definitely the most refreshing due to the sparkling water and the least bitter. 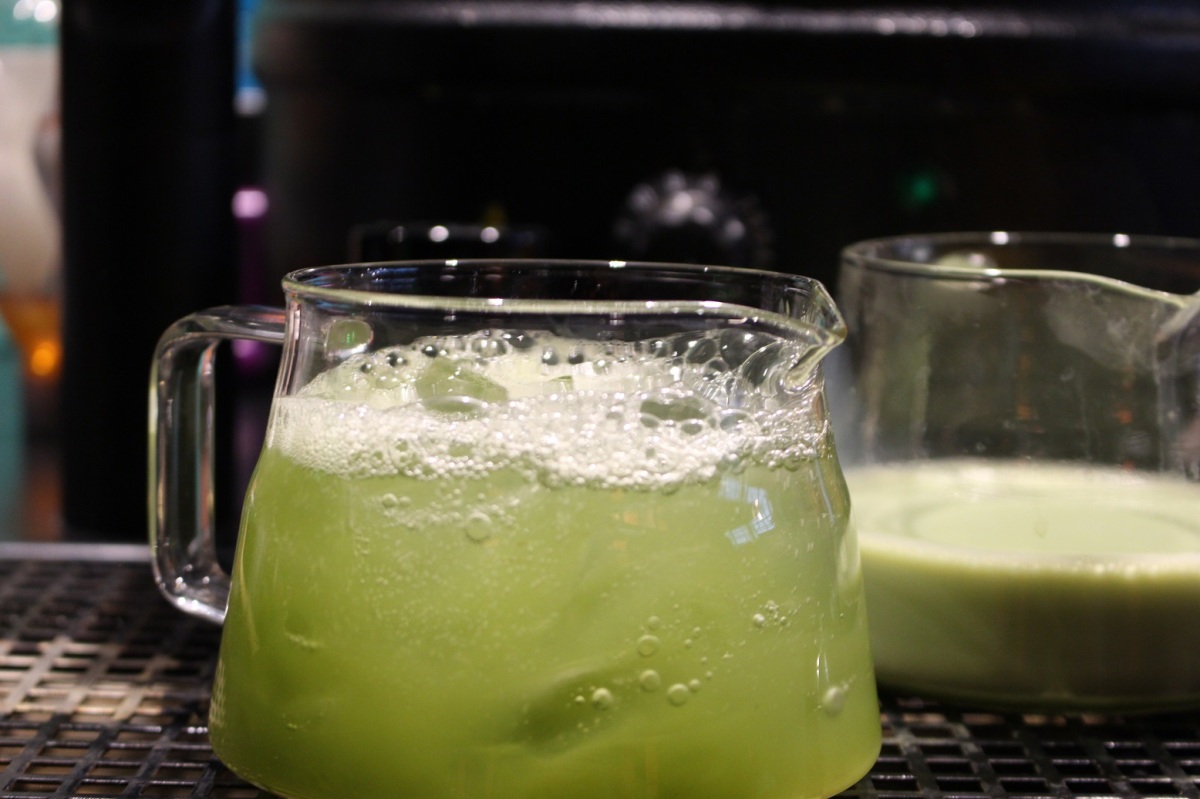 There are a quite a few types of Matcha tea available at T2 that are flavoured too. Vanilla, turmeric and toasted rice to give you an idea of how varied the choices are. I highly recommend if you want to avoid the bitterness as much as possible but want to try Matcha, sparkling and iced is a good way to start. 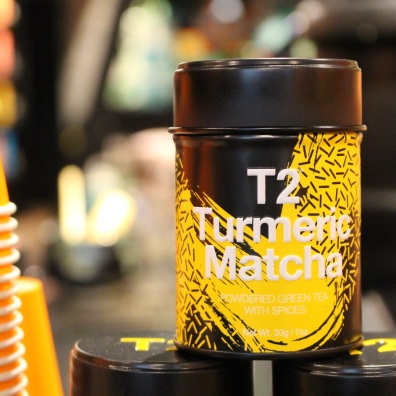 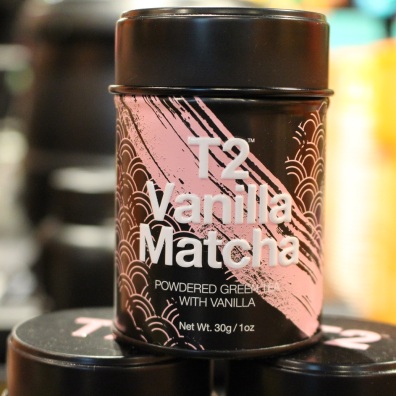 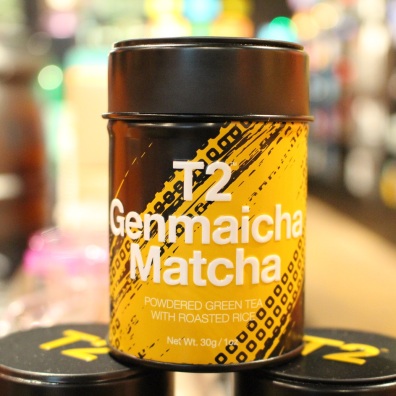 So this was my tea masterclass at T2. I thoroughly enjoyed it and learnt so much. I can’t believe how I can easily explain Matcha tea to someone who is interested and that’s definitely thanks to the passionate and informed staff that work at T2.

Thanks for having me for tea T2! 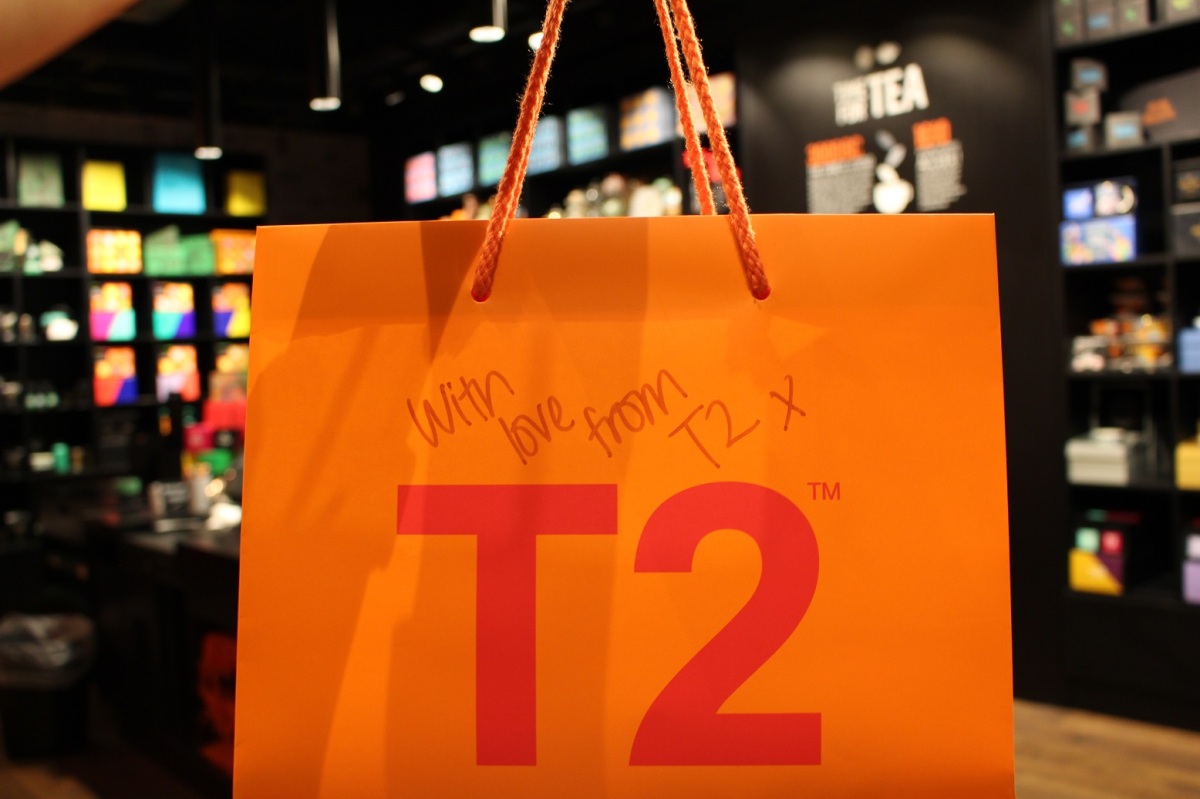