Reopened for business following new owners but what’s changed? EVERYTHING. Read on…

When you are born and grow up in one town like me, you can’t help but create lots and lots of memories around places or locations. The Wheatsheaf in Bow Brickhill holds an unexpected one in Mr LouBou and I’s history. So when an invitation came in my mailbox to check it out following it’s recent new ownership and extensive refurbishment work, it was more than just food and beer that I was heading over for, it was nostalgia.

Some 8 years ago when Mr LouBou and I had just started dating, we ended up at The Wheatsheaf during one of those inpromptu date nights when you couldn’t resist seeing each other, going for random walks and talking for hours and hours without a care in the world.

That’s where the romance ends though, we ended up at The Wheatsheaf and thought why not? to a beer. After two minutes inside the very old and lived in pub, we received a cold reception, were brutally ID’d and made to feel very unwelcome. So decided to sit outside the front of the pub whilst trying to drink our beers as quick as possible for a quick escape. Couldn’t have been funnier or less glamorous.

Fast forward 8 years and how happy was I to hear that The Wheatsheaf was now fully adopted into the Heroic Pubs family. Heroic Pubs run one of my favourite local pubs at the moment, The Anchor in Aspley Guise so that is a promising start! 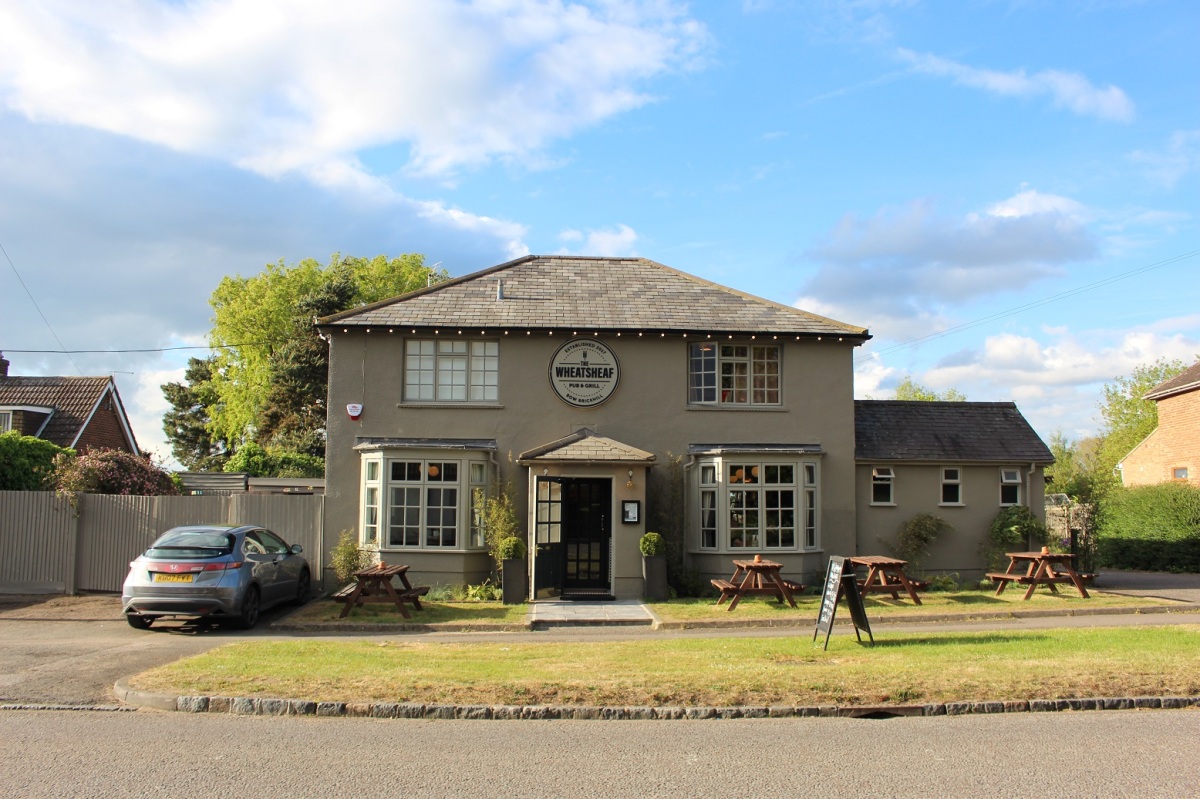 From the main road not an awful lot has changed except a window has been replaced with a big Wheatsheaf Pub & Grill sign and the building is now a rather grey minky kinda colour.

How inviting is an open front door? Simple touch but that’s exactly the vibe every pub should be giving off.

As we entered, it felt like I’d never stepped foot in this place before. Look at the tiles just in the porch pictured above. How chic is the monochrome against the teal woodwork!?

The very same tiles feature on the bar. The decor is unmistakably Heroic Pubs but yet different from it’s sister The Anchor, which has a totally different vibe. Exposed copper pipework, the monochrome tiles, wall planters full of plants (real ones – I don’t envy the daily maintenance of those!) that make up the bar area of The Wheatsheaf feels steampunk, city decor, cosmopolitan, but thanks to the staffs welcome, minus any airs and graces. Next time my converse that I banished for our special date night will be mooching their way through the front door on my feet and I’m sure they will be just as welcome. The place is wholly without airs or dress code.

Approaching the bar we were greeted by the general manager Jodie who was behind the bar serving. How great is that? Another nod to how breezy and chilled the staff are. She showed me the cocktail menu and we had a lil convo about how she loved getting involved with creating the cocktail menu for The Wheatsheaf.

After a little menu peruse (and a special managers recommendation) I chose the Velvet Elvis cocktail which Jodie herself then set about mixing up for me. Mr LouBou ordered a lager (standard).

Whilst the drinks were being prepared my eyes (albeit hungry) were drawn to this glass food stand filled with sausage rolls that was on the front of the bar.

Jodie told us that each day head chef Lewis bakes sausage rolls for the bar. These beauties are black pudding and pork. Apparently the pork stops the black pudding from being too overbearing but with a lovely date night meal ahead of us I’m sad to say I didn’t try one. They are however on my hottest MUST TRY AND EAT IN MK ASAP list (I might even make a regular blog feature of what I can’t wait to sink my teeth into – let me know if you’re interested).

Then my cocktail was ready.

Yes, it did taste as good as it looks. Chambord has to be used with a gentle hand as it can overpower and make a drink very one dimensional but Jodie clearly knows what she is doing when it comes to mixology.

The copper mug fit perfectly into the decor but was robust enough for me that I didn’t feel like I was going to drop a really expensive, fragile cocktail class whilst strutting in high heels (that I NEVER wear) into the rear of the pub to our waiting table for dinner.

The rear of the pub is the “Grill” part of The Wheatsheaf as it’s called (restaurant part to me).

More of the Heroic unmistakable class with interior decorating. How they can make a place look so finished, so flawless yet lived in and inviting, like how we dream for our homes. Although I’m told that it’s a different designer that worked with Heroic on The Wheatsheaf than in the past. Yet they’ve kept to the company style and brief that works so well for them.

Anyways, enough about the home show. I was hungry and took no time in ordering my favourite olives and breads whilst perusing the menu and debating the specials that I was told change daily, depending on what the chef has in to work with. 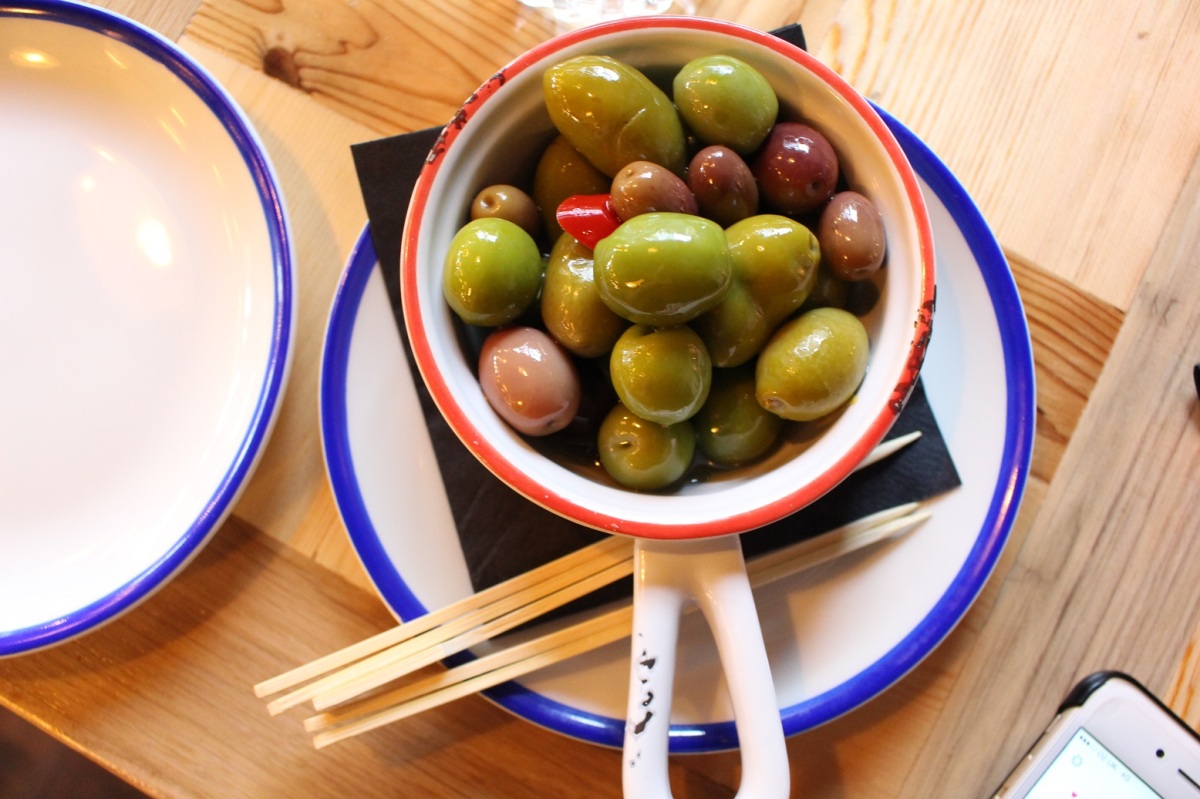 Huge, chunks of bread. Olive bread and sundried tomato bread. With perfectly salted butter. I had to control myself to save from devouring the whole lot before dinner.

Completely taken in by the daily specials menu I ordered the Crayfish Cocktail with Crostini to start.

Super crispy crostini. NOM. Looking back I wished I had been more relaxed to just pile the crayfish atop the crostini and scoff them in one bite but eating them I took the ladylike approach (I think I’m just hungry whilst writing this).

Mr LouBou followed my example and ordered off the specials board too. He opted for Dressed Crab with Avacado on Toast.

The dressed crab was crazy delicious! I would know, I taxed half of it off Mr LouBou. The staff mentioned this dish might make the main menu soon too. It’s what I’m eating when I come back if it does!

For the main event, I was back to ordering off the specials again. It was Friday and I am a soppy traditionalist and couldn’t not try The Wheatsheaf’s fish n chips. Beer Battered Haddock, Chips, Peas with Tartar Sauce.

The underside of that Haddock I wish I could show you properly, was so perfectly battered and crunchy that it made the most poetic crunches every time I put the cutlery into it.

The chips were just as you would expect from seeing the pics, crispy and soft in the middle, just like I love them to be. Peas, well, we have to have something green on the plate don’t we? I would have preferred mushy peas and a more vinegary tartar sauce but I embarrassingly settled for ketchup. Some traditions are hard to cull, okay?

Mr LouBou sidestepped the specials for his choice of main and ordered the Mixed Grill with Chips from the Chargrill section of the menu. 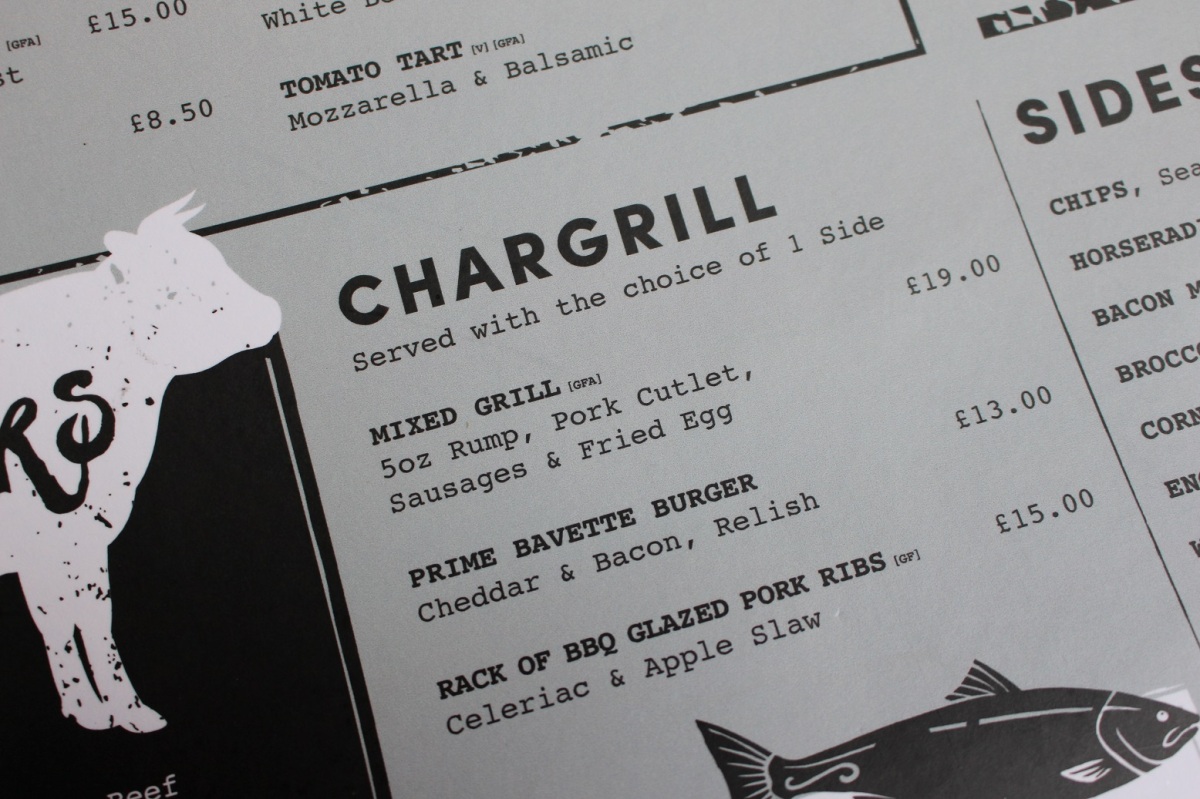 He ordered his steak medium rare and added a Special Sauce / Peppercorn Sauce.

The steak was the star of the plate. A touch of sadness as the pork cutlet was a touch overcooked but the sausage was pleasant enough, I wonder if it’s local? I forgot to ask! But that steak, nom. There was a beautiful chargrilled crust sealing a wonderfully medium rare softness in the middle.

Feeling nearly defeated but not fully down and out it was time to check out the puds.

As the sun decided to vanish until another day and the smell from this sticky toffee pudding was too good to wait for, I apologise for not the best pudding photos!

You know what you’re in for when you ask for sticky toffee pudding. It’s not for those who don’t favour the ultimate in sweet treats and this one doesn’t disappoint in that respect. If I wanted to be really picky I want it slightly sticker please just to give it the biggest “I can’t believe what I just ate, but given a second plate I’d do it again and again…”. 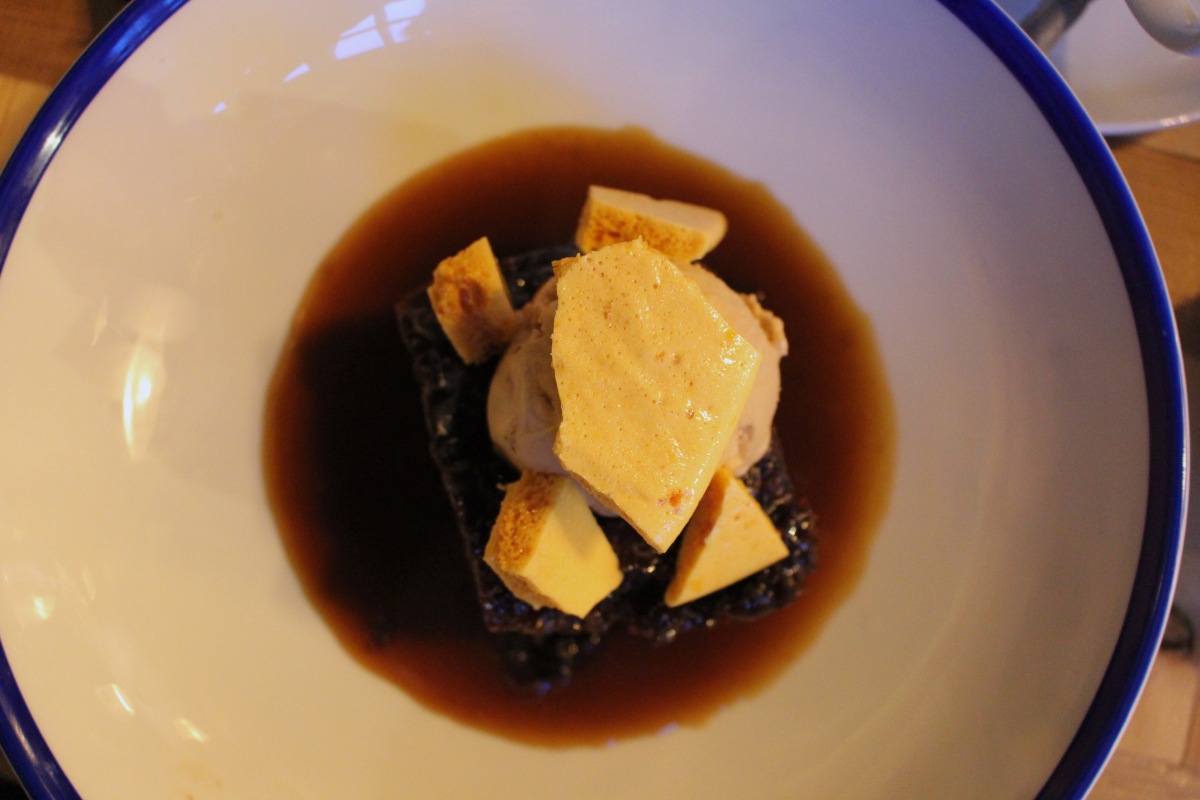 Mr LouBou ordered off the daily specials Carrot & Orange Cake, Orange Icing with Vanilla Ice Cream. Yeah, of course I taxed half and it was delicious. with the freshly cut orange segments on top pulling it together to being quite damn lovely. The addition of that refreshing orange has breathed new life into an often over spiced carrot cake. Nom!

Then it was time to have a little tour of the premises. If you are visiting you must check out the stylish decking at the back. Perfect for when Summer decides to pay us a visit. 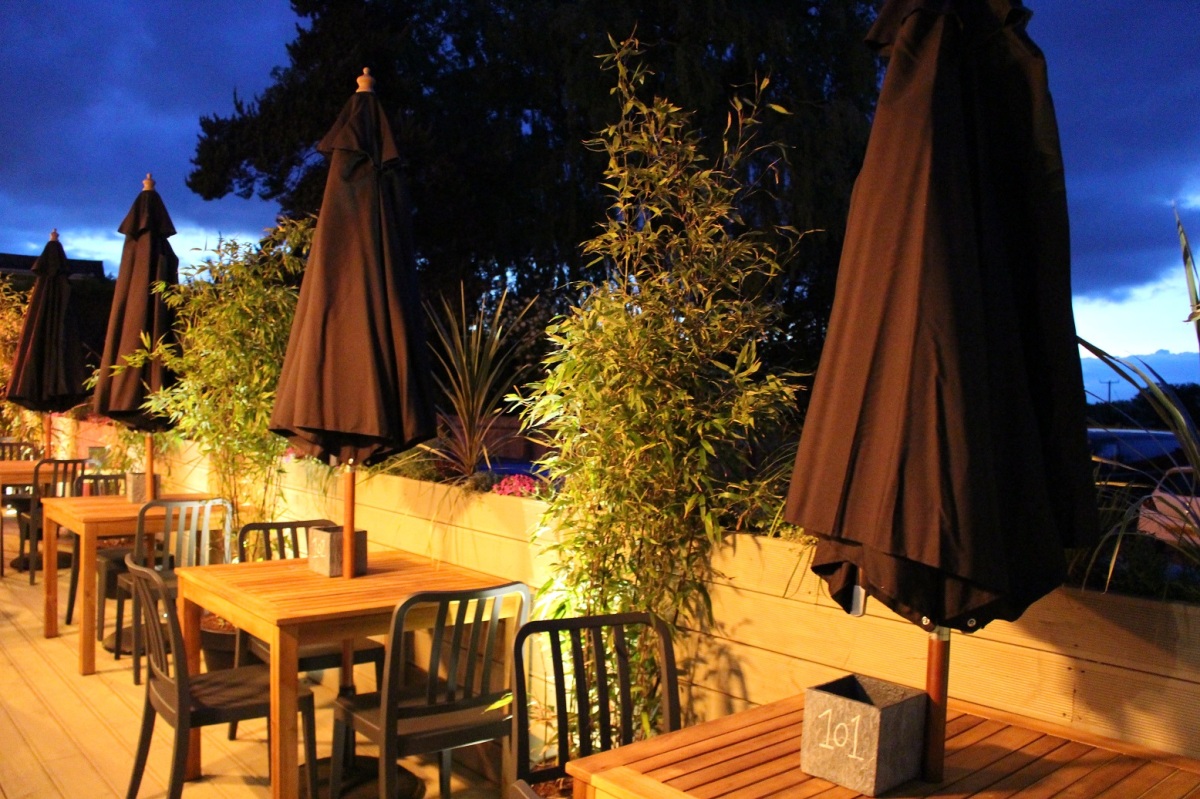 We got to meet the head chef Lewis Moore who has worked his way around (and up) the Heroic family to his first head chef position at The Wheatsheaf.

Then the bar manager took us to see the private dining room which you can hire for special occasions  or just because you’re feeling fancy! Oooo!

Then a last few goodbyes and chit chat before calling it a night.

What a difference 8 years can make, eh? I can see The Wheatsheaf becoming a regular date spot for Mr LouBou and I. Especially love that the chefs offer daily fish specials. My kinda place.

I wish The Wheatsheaf, the head chef, managers and all the attentive and friendly staff there a bright future. You have breathed new life into that pub, how HEROIC of you!

Do you fancy trying a meal at The Wheatsheaf? Head over to my FB page for your chance to win a Meal for 2 with drinks kindly donated by The Wheatsheaf to one of my readers! (Closing date of 26/05/17 so hurry hurry!).